A man’s efforts on a small north Georgia stream were rewarded when he landed a rare golden rainbow trout last... 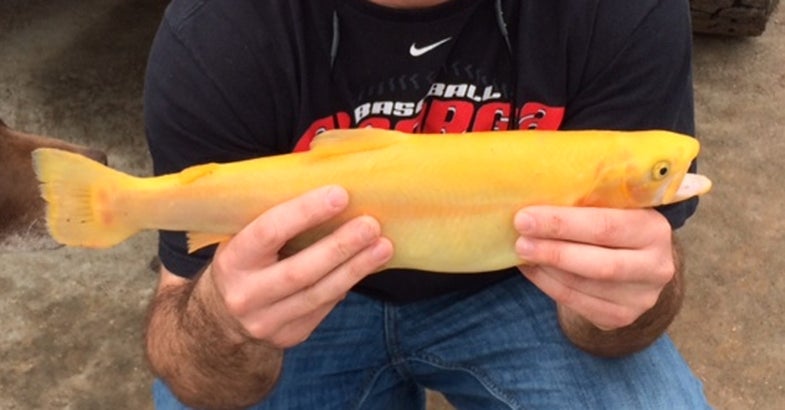 A man’s efforts on a small north Georgia stream were rewarded when he landed a rare golden rainbow trout last week. Georgia Outdoor News reports that Zach Baker, 27, of Maysville, Georgia, caught the fish on a stretch of public water he declined to name. Baker says that three weeks prior he’d seen a golden-colored trout there and then fished the spot once a week in an attempt to catch it.

“When I landed this fish, I was truly amazed,” he tells Georgia Outdoor News. “…I immediately put a stringer in it. True excitement.”

According to the Pennsylvania Fish and Boat Commission, in 1954, a West Virginia hatchery created the golden rainbow mutation from a single fish. When that first fish, which had a blend of golden and normal pigmentation, was bred with a rainbow trout with normal pigmentation, their offspring eventually developed the bright colorings of the golden rainbow trout. The mutation is only a variation in coloration, however, and should not be confused with California’s native golden trout.

Pat Markey, the manager of Buford Hatchery in Forsyth County, Georgia, tells Georgia Outdoor News that the fish probably washed into the public section of water from a private stretch upstream. “The Georgia DNR does not stock these type of fish,” Markey says. “My guess is that this particular fish has been planted by an unknown source.”

According to the Georgia Department of Natural Resources, a permit is required to release any wildlife, including fish.

Interesting enough, this isn’t the first odd trout caught in Georgia recently. In January, Brigadoon Lodge, located on a private stretch of the Soque River in north Georgia’s Chattahoochee National Forest, posted a photo to Facebook of an angler holding a golden rainbow trout. Also in January, Orvisnews.com shared a picture of a tiger trout caught on an unnamed stream also in north Georgia.