Photograph via Twitter/@hirahiroro As The Daily Mail Reports, a Japanese fisherman landed a monstrous, grotesque-looking deep-sea catch off the coast... 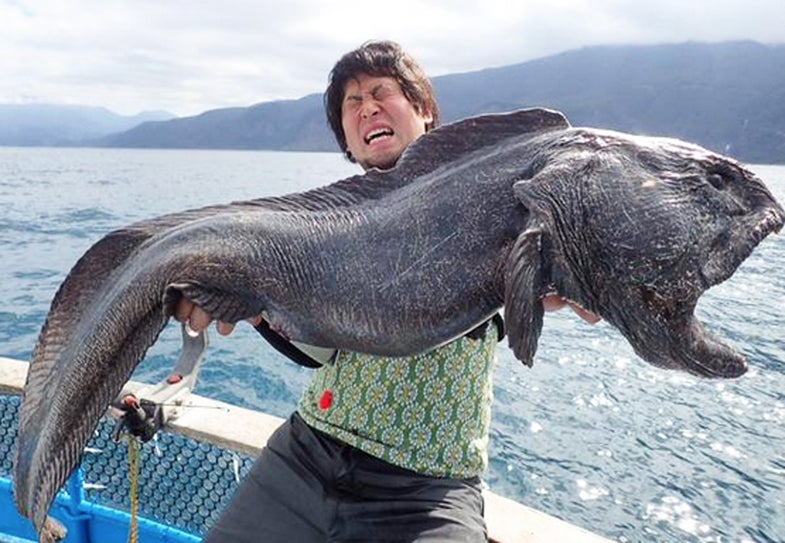 As The Daily Mail Reports, a Japanese fisherman landed a monstrous, grotesque-looking deep-sea catch off the coast of Hokkaido, one of Japan’s mountainous main islands.

Tweeting photographs of himself struggling to support the weight of the massive fish, Hirasaka Hiroshi called the catch “super cool. ” The creature is believed to be a wolf eel, and Hiroshi noted that he had flown to the island twice within the past three months seeking out strange sea creatures such as it. Wolf eels, which feed on small aquatic life on the ocean floor, typically grow no larger than 4 feet long, but Hirasaka’s catch measured more than 6 and a half feet.

As The New York Daily News reports, Hirasaka’s haul could provide more proof of the far-reaching environmental damage of the 2011 Fukushima Daiichi nuclear power-plant meltdown, set off by an 8.9-magnitude earthquake. This frighteningly large fish was caught 400 miles from the site of the meltdown, which was the worst nuclear catastrophe since Chernobyl, in 1986.

Hirasaka is known for eating the unusual fish he catches, although it would seem unwise to do so in this case; since the Fukushima disaster in 2011, fish in the area have been found with up to 2,500 times the amount of radiation than is legally considered safe to consume.