Photographs courtesy of MDNR On Sunday, October 18, 2015, while fishing in a local bass tournament on Hubbard Lake, in... 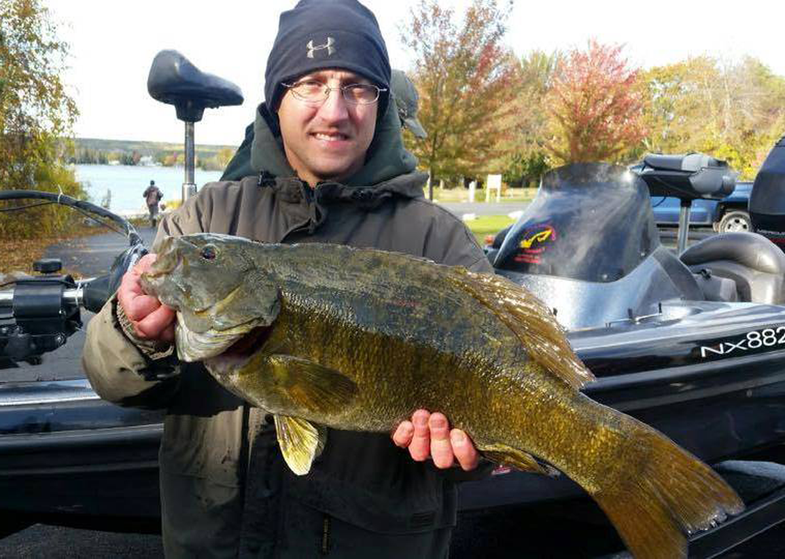 On Sunday, October 18, 2015, while fishing in a local bass tournament on Hubbard Lake, in Michigan, Greg Gasiciel hooked and landed what would later be officially declared the largest smallmouth bass ever caught in the state. Confirmed by the Michigan Department of Natural Resources (MDNR) a little more than 24 hours after Gasiciel reeled it in, the behemoth weighed 9 pounds, 5.28 ounces, and had a length of 24.5 inches.

According to the MDNR, Gasiciel, a resident of Rhodes, Michigan, was Carolina rigging a green twister-tail grub when the fish hit.

“Holy cow, it was amazing just to see that fish come out of the livewell,” says Larry Barns, tournament director for Bass Anglers of the Sunrise Side, in which Gasiciel was competing. “And then he put it on the scales, and I could hardly believe my eyes. I’ve never seen a bass that big.”

No one else has seen a smallmouth of such proportions in the state either—at least not since the last state-record fish was caught in 1906. That smallie was taken out of nearby Long Lake by W.F. Shoemaker, and weighed 9 pounds, 4 ounces, and was 27.25 inches long.

According to Kathrin Schrouder, the fisheries biologist who confirmed the record catch, Gasicel plans on having the fish mounted. “Had it not been a potential state record, [Gasicel] told me the fish would have been released unharmed,” says Schrouder.

Under the current rules, all fish must be examined in person by a DNR fisheries biologist to be verified as a state record.