On the same day, two anglers fishing in Maryland set the first new state fishing records of 2015 by landing... 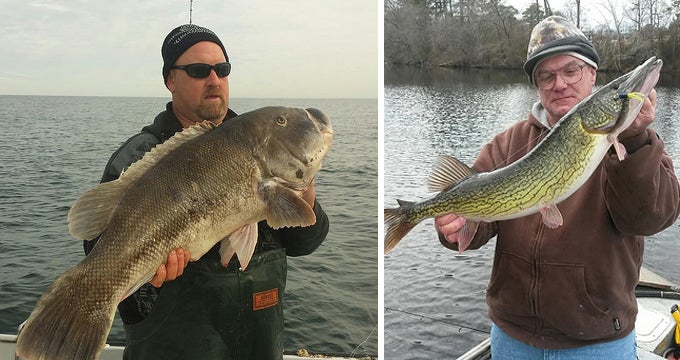 According to Southern Maryland News Net, Kenneth Westerfeld of College Point, N.Y., caught his 28.8 pound tautog about 20 miles from Ocean City on January 2. His fish beats the current state record by more than five pounds. What’s more, the fish is large enough to beat the current IGFA world record of 25 pounds. Since it was weighed on a certified scale per IGFA requirements, Westerfeld said he’ll likely submit an application to certify his catch as the new record.

“Ocean City is the best place for big tautog,” said Westerfeld. “The water clarity is very good and the offshore wrecks hold some really big fish. I’ve been fishing very hard for over 20 years to catch a 20 pound tog.”

Meanwhile, Lee Haile of Towson, Md., was fishing for chain pickerel with his son and a friend on an Eastern Shore pond, where he caught an 8-pounder. “I’ve been fishing for pickerel for over 38 years, and I just knew this one was exceptional,” he said. The fish made a few strong runs, circled their boat, and even dodged the net, but when he eventually subdued the fish, Haile knew it might be a new record. He weighed it on a certified scale and met with a Maryland Department of Natural Resources biologist to confirm the species (per state rules).