There are big northern pike. And then there are pike like the monster Nathan Lafleur caught and released in late... 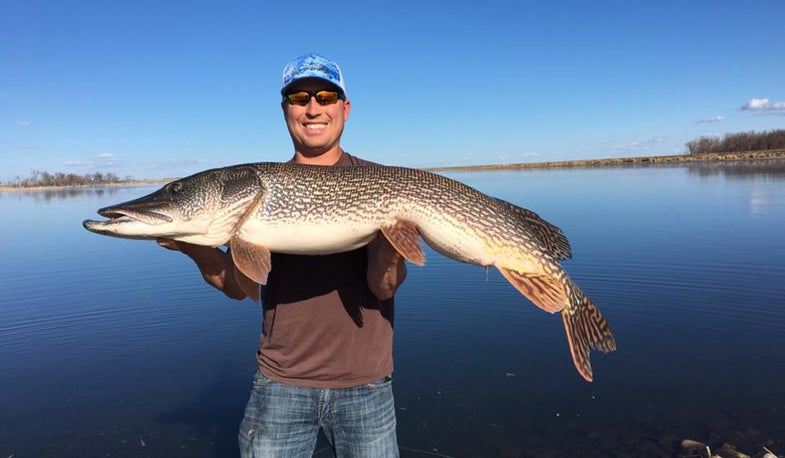 There are big northern pike. And then there are pike like the monster Nathan Lafleur caught and released in late April while flyfishing in a shallow bay of North Dakota’s Devils Lake. The fish, according to Northland Outdoors, measured 51.5 inches in length and had a 22-inch girth.

The state record pike, caught in 1968, was 48 inches long and weighed 37 pounds, 8 ounces, according to the North Dakota Game and Fish Department. Lafleur’s pike, which hit a streamer, isn’t eligible for record status because he didn’t have it weighed, though estimated weights based on length and girth put the fish at about 39 pounds. But despite the fish’s size, Lafleur didn’t hesitate to release it.

“To me, the catch-and-release thing is what’s so important,” Lafleur, who fought the fish for 5 or 10 minutes, told Northland Outdoors. “That fish never could have made 51.5 inches if it didn’t get to make 40 and didn’t get to make 43. Throwing those fish back is what I want people to understand and to develop and not exploit the fishery we have here.”

Lafleur said the pike was “by far” the biggest that he, his brother, or his dad ever has seen on Devils Lake. And that’s saying something, given the fervor with which the three pursue big pike. “After wondering where these top predators hid out, we started fishing them exclusively about 10 years ago,” Boyd Lafleur told Devils Lake Tourism. “We went everywhere; fished every lure imaginable; cast and cast; searched and searched; and for the first three years, caught zero pike over 40 inches.”

But they believed there was a pike 50 inches or bigger in the lake, and last month, Nathan Lafleur proved it.