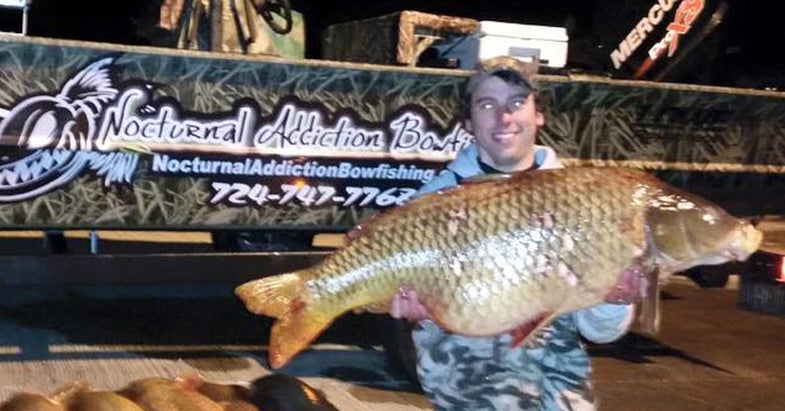 A Pennsylvania man who turned his bowfishing passion into a full-scale commercial venture can now add “state-record holder” to his business cards.

On Easter Sunday, Jordon Miller, 26, pulled a 49.7-pound common carp from the Youghiogheny Reservoir. The Observer-Reporter notes that though Miller has a steady job as a safety coordinator for a gas-and-oil company, this year he kick-started his own bowfishing outfitting business, Nocturnal Addiction Bowfishing, on the side. “I would travel the country and go bowfishing, but there wasn’t anybody doing it here,” Miller told the paper. “We have some great fishing here and I thought, Why not? I had been taking my family and friends out the past couple of years but we officially started the company this year.”

After landing the gigantic carp—which the Bowfishing Association of America has already listed as the new Pennsylvania record—Miller wrote on the Nocturnal Addiction Bowfishing Facebook page: “We really got into some great fish this weekend. … It wasn’t about quantity; it was about the quality! We shot some monsters! The fish keep getting bigger!”

Miller wasted no time sending the carp to the taxidermist. He told the Observer-Reporter that he plans to have an arrow impaling the mount. “You don’t hear of many people getting carp mounted, but I am,” he said.

The current all-tackle Pennsylvania common carp record, caught in 1962 by George Brown, stands at 52 pounds, but Miller’s is the largest shot with a bow.