Paul Glover of Sallisaw, Oklahoma is a middle school teacher and a self-taught fly fisherman, but he’ll soon be able... 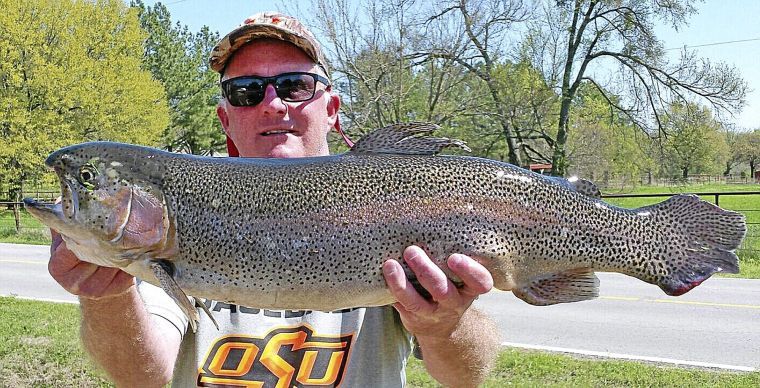 Paul Glover of Sallisaw, Oklahoma is a middle school teacher and a self-taught fly fisherman, but he’ll soon be able to add rainbow trout record holder to his resumé after he caught a 29-inch long, 11-pound, 4-ounce fish from the Lower Illinois River earlier this month.

Glover told the Tulsa World he was supposed to go fishing with his wife, but when she decided to stay home, he went anyway. On the water, he said he wasn’t doing anything particularly different that day, and was using a relatively light 5-weight rod with only a two-pound test leader, a fly of his own design, and a strike indicator – gear suited for much smaller fish that left him a little under gunned when the monster rainbow latched onto his line.

“It was a good fight,” he said. “It took about 15 minutes. It didn’t jump out of the water but it fought hard … I always kind of dreamed about catching a state record down there.”

Oklahoma Department of Wildlife Conservation streams supervisor Jim Burroughs said he hadn’t seen Glover’s fish, but was able to offer some insight into why such a hefty trout was in a stretch of river typically know to hold smaller stock. Reportedly, a hatchery truck mistakenly mixed four or five especially large trout in with the state’s stock and accidentally placed one in the river where it remained for the last year.

“If I recall correctly, they thought they could separate them out, but there was one they couldn’t find,” he said. “I’m fairly certain it’s the same fish. We’ve had a lot of reports from people who thought they hooked it but it broke off.”

Glover’s fish was weighed on certified scales and observed by game wardens, per state requirements, but he’ll still have to submit some paperwork to have his catch certified by the state as a record. If approved, it will beat the current 10-pound, 10-ounce rainbow caught in 2013.

“Unfortunately, I didn’t get to fish very long because it was the second fish I caught,” Glover said. “I didn’t know what to do with it. I haven’t kept a trout in years. I normally let them go, but this looked like a state record, so I decided to keep it.”