In July, a few Michigan anglers pulled up an unexpected bycatch when they reeled in non-native pacu, a South American... 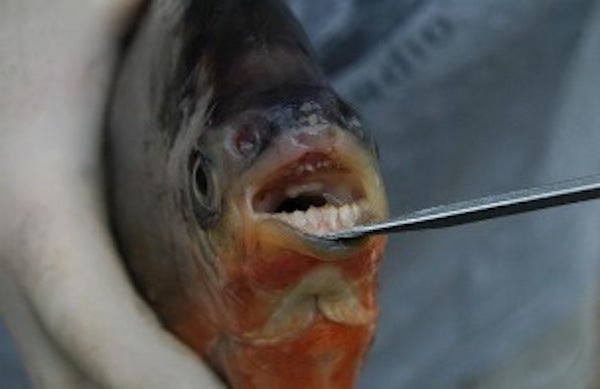 Pacu are known for their human-like teeth, used for crushing seeds and nuts. Michigan Department of Natural Resources
SHARE

In July, a few Michigan anglers pulled up an unexpected bycatch when they reeled in non-native pacu, a South American fish popular with aquarium owners. According to CBSNews.com, at least three pacu were caught during July in Lake St. Clair and Port Huron, Michigan. The fish, which feature large, human-like teeth used for crushing seeds and nuts, closely resemble their cousin, the piranha, and can reach 35 inches in length. The fish frequently outgrow their tanks, prompting owners to release them into the wild.

Fortunately, the fish can only survive in tropical waters and therefore are not considered a serious threat to the local habitat. “Pacus’ temperature requirements are tropical, and Michigan is not a tropical state, said Nick Popoff, a biologist with Michigan’s Department of Natural Resources. “They’re not going to be able to survive our winters, so we don’t’ consider them invasive. We’re concerned with this because it highlights the issue of pet owners releasing their pets into the wild.”

Popoff considers releasing pets into the wild an issue because it typically results in the death of the animal while exposing native wildlife to potentially invasive species. “Pet release is almost never humane. Pets released from confined, artificial environments are poorly equipped to fend off predators and may be unable to successfully forage for food or find shelter,” Popoff said in a statement. “Those that do succeed in the wild can spread exotic diseases to native animals. In the worst-case scenario, released animals can thrive and reproduce, upsetting natural ecosystems to the degree that these former pets become invasive.”

Though pacus have been found in as many as 27 states, the fish found fame in 2011 when Jeremy Wade, the host of the Animal Plant’s River Monsters, pursued them in Papua New Guinea, where they were accused of biting off the testicles of at least two men. In an interview with Esquire, however, Wade said that pacu don’t actually pose a true threat to male genitalia, as a simple pair of swimming trunks provides adequate cover. The issue in Papua New Guinea, he said, was that people did their washing in the same area they discarded old fish and other food items.