Late last month, a trio of Wisconsin kayakers came to the aid an emaciated whitetail buck had fallen into Lake... 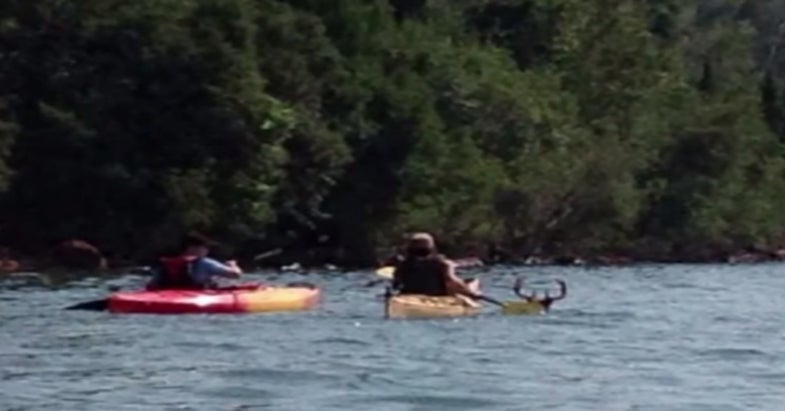 Late last month, a trio of Wisconsin kayakers came to the aid an emaciated whitetail buck had fallen into Lake Superior’s cold waters and stranded itself in a narrow cave.

FOX affiliate KQDS reports that kayaker Jen Boyd was traveling with her friend Dawn Kerrigan and her son, Ricky, along the south shore of Lake Superior near Bayfield—an area popular among recreational paddlers because of its rock cliffs and caves—when they noticed a whitetail buck trapped in a crevice.

“I was a little shocked,” Boyd said. “I am sure the fear in my eyes matched his. And the look on his face was almost to say, ‘Are you here to hurt me?’”

How the buck managed to end up in the water is a bit of a mystery, though park ranger Joe Simon believes that it likely fell or jumped from a nearby 60-foot cliff. Then it eventually worked its way into the narrow cave and either couldn’t figure it’s way out or felt the danger of venturing into open water was too great.

“In each of those little caves, as the kayakers are coming in, it gets spooked,” Simon said. “They don’t know where to go. They get scared. And that’s what led to it being trapped in there so long.”

Though it’s unclear just how long the deer was stuck in the cave, Boyd said that the animal was showing signs of starvation. “You could just—prominent hip bones sticking out,” he said. “He just looked weak. He was just shaking and shivering because inside the cave the water is freezing.”

Agreeing that they didn’t want to leave the deer, the paddlers calmed and coerced it out of the cave and alongside their kayaks. Nudging the buck along, they eventually guided it safely to shore.

“I couldn’t believe it at first, that he was actually swimming right by my kayak,” Ricky Kerrigan said.

“It brings me to tears sometimes because I don’t want to see any animal suffer, especially not like that,” Boyd said.