A video from the Land Down Under showing an angler towing his boat with a mobility scooter is becoming a... 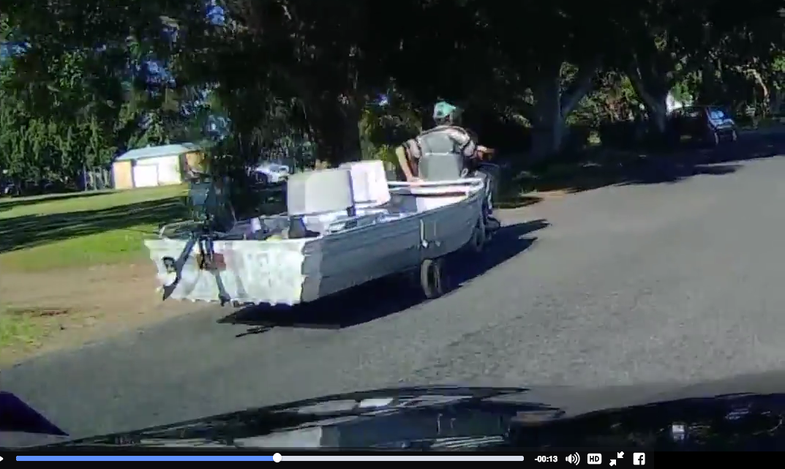 A video from the Land Down Under showing an angler towing his boat with a mobility scooter is becoming a viral hit. The video helps prove that fishermen never die, they simply get older — and wiser.

The few seconds of footage, captured near Ballina, Australia, shows an unidentified man driving with one hand and holding on to the boat with the other, slowly shuttling the vessel along the shoulder of the road to a nearby boat ramp.

According to the video description, the driver of the car made several laps around the neighborhood to get a good view of the situation, then later posted the film to a Facebook page belonging to Dash Cam Owners Australia – a grassroots organization that shares as-they-happen accidents and roadside oddities captured with dashboard-mounted cameras to promote safer driving.

“I think he started to suspect something when we lapped him 3 times to get solid footage. Ingenuity at its finest,” a poster known as Trace said.

Reactions to the video were mixed. Some praised the man for thinking outside the box, while others criticized him for throwing safety out the window and towing an unlicensed, uninsured, unsecured trailer on public roads. However, one post in particular helped shed light on how the man got on the road in the first place.

“This is my Dad. He’s been working on the boat for a few weeks now and I guess he wanted to test it out. I’ll show him this video tomorrow. See if he laughs. Thanks for sharing! And thanks for the cool comments, everyone!”