In a video made from trail-cam photos taken this October in the foothills of the Canadian Rockies, a grizzly bear... 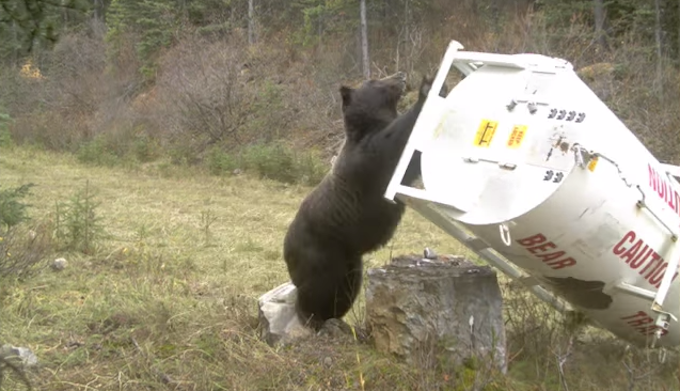 In a video made from trail-cam photos taken this October in the foothills of the Canadian Rockies, a grizzly bear easily lifts, flips, and pushes a 650-pound bear trap about 11 yards, while trying to get at whatever bait is inside. It’s an impressive reminder that grizzlies are powerful animals.

According to the Calgary Herald, this isn’t the first time that the video editing skills of Alberta Parks conservation officer Glenn Naylor, who spliced together stills from one of the 100 trail cameras his department has set in the Kananaskis region of Alberta, have helped us learn about grizzly behavior. Last year, he created a video that has been viewed more than 3,000,000 times. It documents a month in the life of a popular rubbing tree.

In the clip, the tree is visited by elk, black bears, and a mountain lion, but four grizzlies scratching and rolling around the tree are the highlight. It has been featured on “The Colbert Report” and inspired a BBC show on Alberta’s grizzly bear conservation effort, according to CTV News.

Naylor, who began editing the videos as a hobby in his free time, was both surprised and thrilled by the reaction. “It means a lot to me,” he said. “We need to keep bears on the landscape, we need to find ways to ensure that we can live with them.” Watch both of Naylor’s videos below.