Northeast Rut Reporter Mike Bleech has been hunting whitetails in his native Pennsylvania and throughout the Northeast for more than... 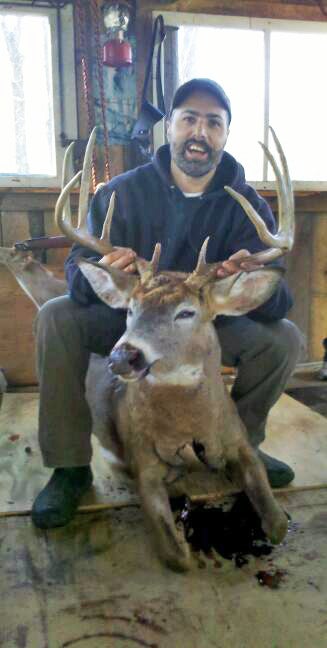 Northeast Rut Reporter Mike Bleech has been hunting whitetails in his native Pennsylvania and throughout the Northeast for more than four decades. A Vietnam veteran and full-time freelance outdoor writer, Bleech has had more than 5000 of his articles published. States covered: ME, NH, VT, MA, RI, CT, NY, NJ, PA OH, MD, DE.

Steve Topper, a Connecticut bowhunter, has been providing me with rut information from his area. Today he discovered that a huge 10-point buck had been taken right across the road from his home.

James Myers, of Torrington, Connecticut, laid out a scent trail using Tink’s No. 69 on a drag line as he walked to his stand.

The place Myers was hunting contained several scrapes. Topper believes that the bucks are heavily into the rut.

After getting into his treestand he saw a buck about 150 yards away and downwind. The buck was constantly lifting and dropping its head as if smelling the ground. When he caught wind of Myers’ scent trail the buck ran straight toward him.

It stopped with its head and neck obscured, but with an opening to the vital zone. He released his arrow at a distance of 25 yards.

Myers’ thick-necked buck weighed 165 pounds after being field dressed. The antlers have an inside spread of 18 inches. The G3 tines are 9-1/2 inches in length.

The area where they hunt is partly agricultural, including corn. They both had trail cams out in the area, but they had never seen this buck.

Topper added that Myers took a 14-point buck in the same area three years ago.