As we reported last September, biologists from the Massachusetts Division of Marine Fisheries (MDMF) were able to tag 5 great... 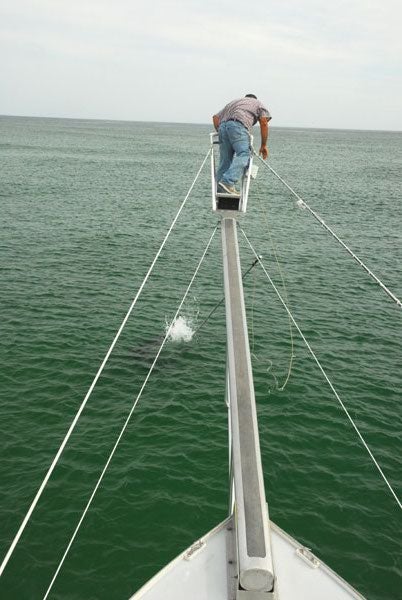 As we reported last September, biologists from the Massachusetts Division of Marine Fisheries (MDMF) were able to tag 5 great white sharks along Monomoy Island on Cape Cod’s southeastern shore. Now 4 months later one of those satellite-transmitting tags has popped up about 50 miles east of Jacksonville, Florida.

The tags were placed by Capt. Bill Chaprales throwing a harpoonlike device from the pulpit of a “stick” boat (photo), meaning one more commonly used in harpooning giant bluefin tuna or, historically, broadbill swordfish. The sharks were located with the aid of a spotter plane, and were for the most part swimming just outside the surf line in the area of a large seal colony.

This is especially significant because the MDMF’s radio tagging was the first-ever on great whites in the Atlantic Ocean. The tags themselves accumulate data such as the sharks’ swimming depth over time and are designed to pop free of the fish eventually, at which point the tag floats to the surface and starts transmitting so it can be located and recovered. For more details see this section of MDMF’s website.

Eventual data analysis will show the shark’s travel pattern, which to this point has been generally unknown for Atlantic great whites. There is, meanwhile, nothing unusual about Cape Codders in general spending part of the winter in Florida. It was not specifically known, however, that sharks are snowbirds, too.