I’m sure by now most of you know my affinity for carp on the fly. They grow large, live almost... 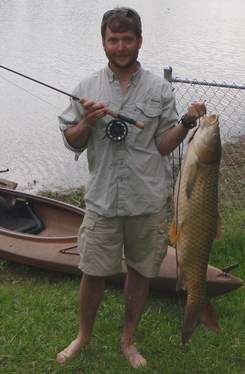 I’m sure by now most of you know my affinity for carp on the fly. They grow large, live almost everywhere, pull like little locomotives, and are a very technically challenging fish to catch. That’s why I love stories like the one that was sent to me earlier this week about an angler named J.D. McKeigney. The story was originally written by Bobby Cleveland from The Clarion-Ledger in Mississippi.

McKeigney hooked and landed what now seems to be the largest freshwater fish ever caught on a fly in Mississippi just over a week ago. And yes, it was a carp, weighing in at 26.19 pounds. It apparently took over 4 1/2 hours to land.

McKeigney hooked the fish on land and from there he got into his kayak and followed the the carp into a cove where after a couple hours of fighting the fish he realized the line was snagged around something. That’s when he knew he had to go swimming.

“I took everything out of my pocket, tied my rod to the kayak with my life jacket and dove in,” he said. “I swam down six or seven feet and found the limb it was wrapped on. I went down two or three times and couldn’t get it. Then, I noticed the boat had blown off and I had to swim 30 yards to get it.”

After retrieving the boat and dealing with the now incredibly tangled line he did something I’ve never head of another angler doing. He cut his line, twice.

“I did the only thing I could think of. I cut the line before the tangle, swam down and cut the other end at the at the limb and tied them together.”

He then fought the fish for over an hour finally netting it with some help from some neighbors and nets of varying sizes and shapes.

The real kicker is that for hours he texted back and forth with his dad on how the fight was going. Finally letting him know that he had subdued the beast over four hours from the first text.

Now I’ve heard some fish stories, but this is one of my favorites that I’ve heard in a long time. What about you? What’s the craziest “fish story” that you’ve ever heard?