Here’s one good thing to come out of the recent troubles with that volcano in Iceland: the biggest brown trout... 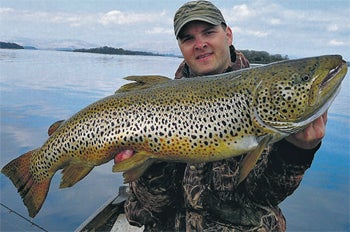 Here’s one good thing to come out of the recent troubles with that volcano in Iceland: the biggest brown trout in Ireland in over a century…

From the story in the Dublin Independent:

_Heard the one about how a volcano helped a fisherman land the biggest trout caught in Ireland for more than a century? Visiting Czech angler Karel Sourek should have been back home in Prague regaling his friends with tall tales of the ones that got away on his first trip to Ireland. Instead, thanks to the volcanic ash, he was forced to wait for a week for his return flight and was back on Lough Corrib when he landed a whopper — and the fish lived to tell the tale. His catch, which measured 90cm in length and weighed in at 11.4kg (25.1 lb), is the biggest trout caught in Ireland in more than 100 years, the Central Fisheries Board confirmed yesterday.

The catch was also only a few ounces short of the record set in 1984. Mr Sourek had travelled to Ireland and was fishing on the lough with his friend, Emil Bucko, who lives in Oughterard. They were fishing in eight metres of water when Mr Sourek snagged the bottom — but when the “bottom” started pulling back they realised they had hooked a monster. After weighing and proudly photographing his catch, the fish was sportingly returned alive to the lake. Last night, Mr Sourek said he still could not believe his luck. “We had got him into the net and I was shocked and screaming. I have seen many big fish in my life but this fish was magnificent.”_