Merwin: Flies or Artificials Only? You Decide

This thought occurred to me the other day while fishing a no-kill area of a major trout river: Should it... 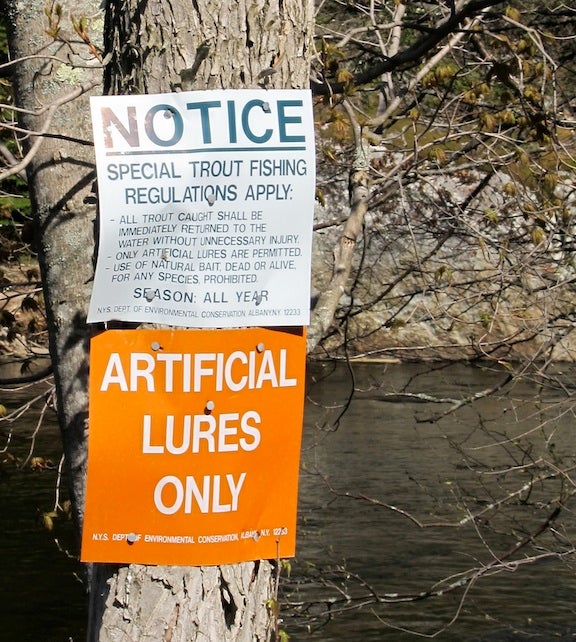 This thought occurred to me the other day while fishing a no-kill area of a major trout river: Should it be “artificial lures only” or should it be “fly fishing only?”

That’s not a simple question. Artificials-only allows spinning tackle and lures to be fished side by side with all the fly anglers who most commonly populate such areas. That’s democratic and, I think, generally a good thing.

The problem is with treble hooks on spinning lures. One key to trout survival in catch-and-release is speed. The faster you get the trout back in the water, the better. It is almost always substantially faster to unhook a single hook than a treble hook. And a single hook does less physical damage to a trout in the first place.

Some rules in some areas require “single-hooked artificals only” for those reasons. That’s no big problem for spin fishermen, who can replace the treble on a Mepps spinner, say, or any kind of trout spoon with a small, size 8 Siwash-style single hook. The trout don’t care if they are hooked on a single-hooked lure or a single-hooked fly. The physical effect is about the same, and releasing fish will be equally easy in either case. So I think a “single-hooked” requirement is a good idea.

Now comes the rub: “Fly only?” At first it might seem to be more of a societal (read snobbish) rule than one of biologic necessity in successfully releasing fish. There are times when I with an ultralight spinning rig will outfish the fly guys because I can cover more water more quickly and efficiently. And there are times–especially during a hatch with rising trout–when the fly guys will score much higher. Fly fishing might be seen (wrongly, I think) as being more difficult and producing fewer fish. And so a fly-fishing-only rule could be argued as a conservation measure.

Let’s hear your take on this: Single-Hooked Artificials Only? Fly-Fishing Only? Or what?