A British carp angler recently got a little (well actually a pretty damn big) taste of the American south when... 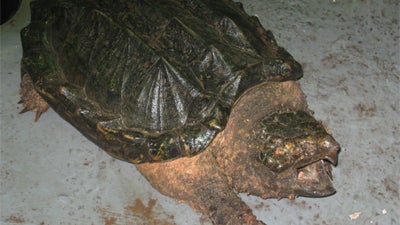 A British carp angler recently got a little (well actually a pretty damn big) taste of the American south when he caught an 57-pound, 80-year-old alligator snapper out of a Birmingham, England lake.

From this story on Sky News:
_Steve Bellion, 23, was angling for carp when he hooked the 57lb (25kg) reptile at Earlswood Reservoir, near Birmingham. He eventually hauled the 2ft-long creature on to the bank, and it was identified as an 80-year-old alligator snapping turtle, normally found in the eastern corner of the US. The catch has solved a long mystery in local fishing circles – tales had abounded for a decade of a giant creature biting through lines and savaging ducks. The ancient female was transferred by British Waterways to West Midland Safari Park, where it is being kept in quarantine for 30 days and checked by vets. The turtle – which has yet to be named by its new keepers and can live to 160-years-old – will be housed in a vivarium with a male companion.

Bob Lawrence, director of wildlife at the safari park, said: “It’s looking fine, but so it should be having had half of Britain’s fish stocks at its mercy. “If it grew any larger it would have been a danger to shipping.” He said it highlights the danger of introducing alien species into Britain’s waterways, in the same way that American signal crayfish have caused such depletion to fish stocks and the UK’s native crayfish. And he said the problem is only likely to get worse with global warming. “Thankfully alligator snapping turtles are a rarity in British waters – they can create havoc for native species,” he told Sky News Online.

“It was probably dumped by its owner after it grew too big or became a nuisance. “They have been known to attack small domestic pets or children, but I don’t think this one would have drifted too far from the water. “Because it has no natural predators, it could have lived to a ripe old age and grown to up to 80kg. I just hope there was only one and it didn’t have any offspring.”_

How an iconic (and threatened) American turtle found its way across the Atlantic and into a British lake remains a mystery, but seriously, “known to attack small domestic pets and children”? I think maybe someone’s been watching too much “River Monsters.” Besides, any turtle that dines on carp and/or lapdogs is a friend of mine.