The news of aquatic weirdness from Great Britain just keeps coming. Last week it was a giant American snapping turtle.... 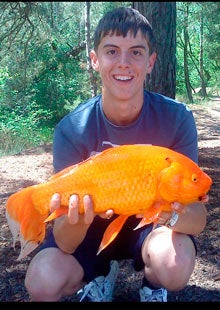 From this story in the Guardian:
_Countless children have been delighted to win a tiny goldfish in a plastic bag when the fair comes to town. But 16-year-old Nick Richards is celebrating after ending up with what may be the biggest goldfish ever caught in Britain – a 5lb (2kg) monster plucked from a lake in Poole, Dorset. It is thought the 40cm-long (16in) fish may have been abandoned after outgrowing a tank and have expanded in size since. Richards, from Camberley, Surrey, was fishing for carp close to his parents’ holiday home when he noticed a flash of orange under the water.

He positioned his rod and bread bait close to the spot and seconds later began reeling in the mystery fish. He said: “I’d heard rumours there might be some big carp there and thought I’d see for myself. I was there for two days running and caught some big common carp. “Then suddenly I saw this big orange fish cruising along the top of the lake. At first I thought it must be a really fat koi carp, but when I saw it properly I realised it was a common goldfish – just like one you might keep as a pet. “It looked like it was healthy and in good condition. The lake is sheltered with plenty of food, so it’s doing pretty well. Earlier in the day I’d joked that if I caught a big fish I’d call it Billy, so of course the goldfish got the name.”

The goldfish – Latin name Carassius auratus auratus – is usually small enough to be kept in a child’s aquarium but, as Billy shows, can grow much larger. It has been kept as a pet in China for hundreds of years. Ruth Lockwood, from the English Carp Heritage Organisation, said: “It’s difficult to confirm that it is the biggest ever caught in the UK because it is an ornamental fish and the record won’t be recognised by the British Records Fish Committee.” And the fate of Billy the goldfish? He’s back home. “I put him back in the lake straight away,” said Richards. “Some people have said that if I do catch him again though it might be an idea to give him to someone who has a big tank.”_

Personally, I don’t see where a five-pound goldfish is very practical. I mean, how would you flush it down the toilet after it dies (as all “pet” goldfish invariably do)?