Salmon Series, Part IV: Save Wild Salmon by Eating Them

Contributing editor David Draper recently returned from a fishing trip in Alaska. While there, we asked him to cover all... 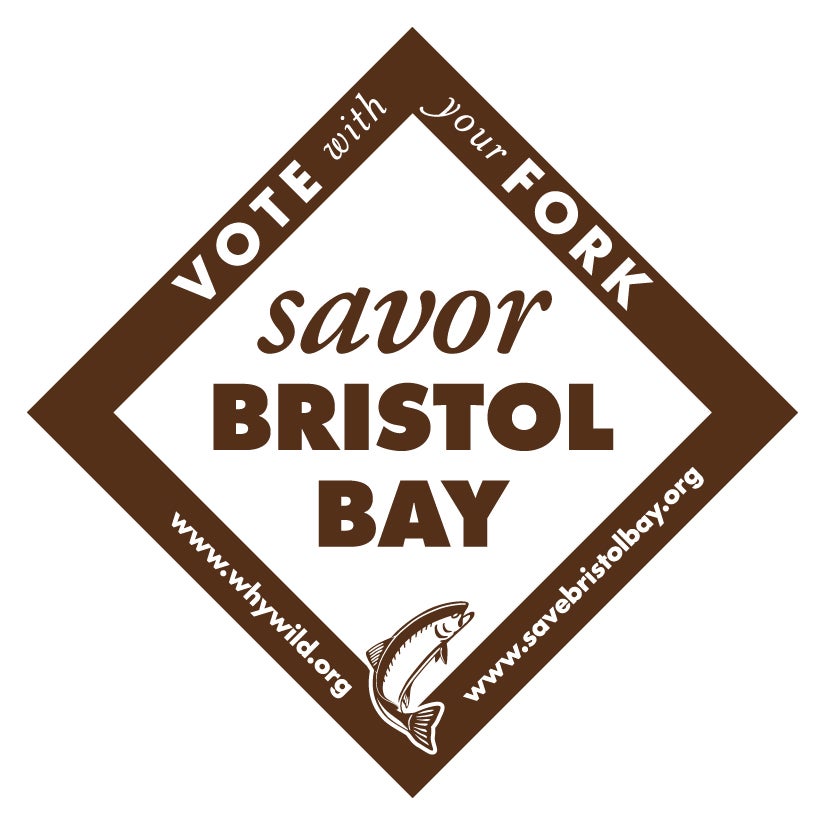 Contributing editor David Draper recently returned from a fishing trip in Alaska. While there, we asked him to cover all things salmon–cooking, eating, and, in one case drinking. This is the fourth of five stories from his trip.

While British Petroleum continues to p*ss in our cereal bowl, it’s a good time to remember there are other threats to the environment. Sure offshore drilling is hogging the headlines right now and rightfully so, but mining can have just as devastating effects. According to Paula Dobbyn, Director of Communications for Trout Unlimited – Alaska, 70 percent of watersheds in the West have been impacted by mining.

I ran into Dobbyn at a farmer’s market in Anchorage as her organization hosted an event designed to raise awareness of the threats posed to Bristol Bay by the controversial Pebble Mine project. At the Savor Bristol Bay event, which featured a salmon filleting demonstration and salmon cook-off, TU was giving away bumper stickers advertising “Do Your Part to Save Wild Salmon: Eat One.” I asked Dobbyn to explain this message and why sportsmen should be concerned about the Pebble Mine.

(You can find out more about the Pebble Mine and the threats to Bristol Bay at www.WhyWild.org and www.SaveBristolBay.org.)

F&S: Aren’t wild salmon populations threatened? How does saving wild salmon by eating one make sense?
PD: In many parts of the world, wild salmon are threatened, endangered or extinct but fortunately not in Alaska. In fact, the 49th state has abundant, carefully managed stocks of five Pacific salmon species. Bristol Bay is the largest producer of sockeye salmon in the world. During the summer of 2009, 40 million sockeye returned to Bristol Bay to spawn and a similar number is expected in 2010. By choosing wild Bristol Bay sockeye salmon as a food source, consumers are expressing their support for a healthy, sustainable fishery that employs thousands of people, generates hundreds of millions of dollars in revenue and sustains the traditional diet and culture of Alaska Native tribes.
**
F&S:** What are the threats to wild salmon?
PD: In the Lower 48, dams, water pollution, urban and resource development that results in habitat degradation and mismanagement of hatcheries and fisheries have all contributed to the demise of wild salmon. Salmon farming practices around the world have harmed native wild salmon stocks in both the Atlantic and the Pacific. While it may seem intuitive to think that eating farmed salmon is one way of alleviating pressure on wild stocks, it actually only makes things worse for both wild salmon and the nation’s sustainable wild salmon fisheries. In Alaska, resource extraction and development pose the greatest threats to healthy salmon populations. For example, proposed large-scale mineral development, namely the Pebble copper and gold project, poses serious threats to the Bristol Bay watershed. If allowed to proceed, the mega-sized Pebble mine would be built in the headwaters of two of Bristol Bay’s largest salmon-producing rivers, the Kvichak and the Nushagak. Pebble would expose the region to acid mine drainage and other industrial toxins that could pollute the surface and ground water, contaminate many acres of soil and threaten Bristol Bay’s salmon runs. Large volumes of water to operate the mine would also be taken from local lakes, streams and ponds, further endangering the health of the salmon

F&S: What can I do as a sportsman to help protect wild salmon populations?
PD: Go out and catch some. Wild salmon are some of the best fighting game fish you’ll find. Alaska has five species of Pacific salmon, so there’s usually something to catch either in the ocean or in freshwater, depending on what time of the spring through fall you are in Alaska. Once you’ve caught wild salmon, and had the opportunity to enjoy that fish on your plate, you’ll be motivated to do what you can to protect the resource.

F&S: I’m going salmon fishing in Alaska and want to bring salmon home. Am I hurting the salmon population?
PD: Alaska’s fisheries are managed to support the long-term health of the salmon runs. If returns are deemed too low by the professional fisheries managers at the Alaska Department of Fish and Game, they close the season for that particular river. Closures may be temporary or for the entire season. That said, salmon stocks in Alaska are far healthier and more abundant than those in the Lower 48. Many anglers bring home freezer boxes of fresh caught Alaska salmon every season – just look around any airport with flights leaving the state in the summer. If ADF&G says it’s alright to catch and keep salmon where you’re fishing, the sustainability of that run is not threatened. There’s nothing that says you can’t practice catch and release if that makes you feel better. But don’t hesitate to catch some and bring them home to share and enjoy!

Method:
Preheat oven to 500 degrees. Place Bristol Bay Sockeye fillet in a shallow baking pan. Season with ½ teaspoon Salt and 1/8 teaspoon freshly ground black pepper. In a small mixing bowl, add the remaining ingredients, including the remaining salt and pepper. Mix well. Spread mixture evenly on top of fillet. Place in oven and bake for 15 minutes, or until desired doneness depending on the size of fillet. Remove from oven and divide into two portions. Plate and top with remaining pan juice and serve. Enjoy!