Yet another simple but effective tying tip from the master Jason Borger. -TR The Interlocking Wing is a slick way... 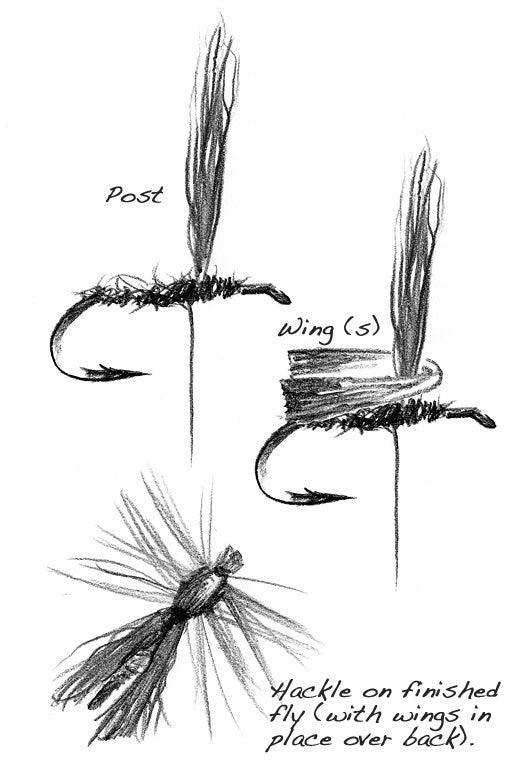 Yet another simple but effective tying tip from the master Jason Borger. -TR

The Interlocking Wing is a slick way to build certain types of down-wings, but is quite straight-forward in terms of the physical handling of materials. A simple parachute-style post (I prefer something like poly yarn or Z-lon) is tied in at the rear of the thoracic area of the fly. The base of the post is not reinforced with thread wraps–such reinforcement is a hindrance to the interlock. The tying thread remains just behind the post.

A sparse length of winging material (like straight Z-lon, etc.) is then folded around the base of the post so that the ends of the winging material point rearward over the abdomen of the fly. This post/wing juncture is the interlock. I have found it best to gently pull both the post and winging material in opposite directions to make certain that the interlock is secure and tight. The winging material is tied down just behind the post. Body-colored thread or a turn or two of dubbing will mask the wraps. If you want strongly separated wings, you may also want to take a few X-wraps as you tie the wings down. It is at this point that legs need to be added to the fly.

There are several ways to create legs when using the Interlocking Wing technique, with perhaps the simplest being to dub the thorax and then wind a hackle over it (using “X”-wraps provides enhanced support for the fly on the water’s surface). The top and bottom of the hackle are then trimmed off. (I’ll get an alternate hackling technique up here on FlyTalk for one of the next tying posts.)

Once the legs are in place, the upright post is pulled forward and secured behind the hook eye. The wings are then trimmed to the desired length and shape.