Straight from The Bug Guy: Spring Isn’t Only About Caddis

Fly Talk’s resident insect guru, “The Bug Guy” Robert Younghanz, chimes in with the following things to look for when... 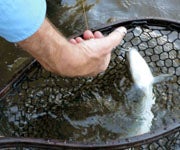 Fly Talk’s resident insect guru, “The Bug Guy” Robert Younghanz, chimes in with the following things to look for when you fish in the early spring:

“The blue-winged olive is one of the most prolific and biologically diverse mayfly families, known by biologists as ‘Baetidae.’ Did you know that there are over 130 species of Baetidae in United States and Canada alone? On a given day, there can be myriad different species emerging from the river. With such biodiversity, always make sure you’re ‘matching the hatch’ exactly. The key is being cognizant of size, color and profile.

For the more intrepid fly fisher who cannot wait for the ice to melt away from the edges of the river, stoneflies are the only aquatic order that have substantial winter and early spring fauna. The all black and wingless Capnieda can be a tasty treat for any trout even when the river is close to completely frozen over. In early spring the little brown stonefly, Taeniopterygidae, will often emerge and make its way out of the icy river, even before you can keep the ice out of your guides!

If you are a fair weather fly fisher and wouldn’t even consider wetting a line until the end of April, you’ll also be missing out on the emergence of a couple of additional mid to large stoneflies. Hesperoperla, the larger gold/brown stone as well as Skwala the medium brown stone both emerge before most anglers dream of putting a boot in the foot numbing waters of spring.

In early spring rivers will often be the most clear and at their lowest flows of the season. Although trout may be hungry after a cold hard winter, they can also be extremely ‘spooky.’ Low flows and gin-clear water instinctively make a trout weary of predators. Remember: If you can see them, then they can see you. A stealthy approach to the river is always a good idea and even more so, in the spring.”

If you’re looking for more buggy advice, be sure to check out Robert’s instructional DVDs which can be bought here.