Giant Lake Trout on the Fly?

This is a photo of my friend Russ Miller torturing himself with a 9-weight rod and full sinking line on... 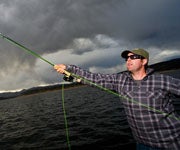 This is a photo of my friend Russ Miller torturing himself with a 9-weight rod and full sinking line on Lake Granby last night. He was casting a double bunny fly that looked like a dead squirrel, so we decided to call it Bernie’s Bunny.

After shooting an episode of Hook Shots earlier this spring for giant lake trout on Lake Granby with uber guide Bernie Keefe, he asked if I’d like to come back up and try for the huge fish on a fly. It took me all of about one second to make my decision.

I’ve actually toyed with the idea for a number of years but was never really sure how to go about it. Landing 30- to 40-inch lake trout on a fly is a feat very few fly anglers have done, especially here in the lower 48. The window of opportunity is very small. You cast a lot for precious few shots at fish, and simply hooking one of these huge fish never ensures you’ll land it. Fly anglers might get a couple weeks in the spring and a couple in the fall when these large aggressive fish come up into the shallows to feed and spawn. After that, you better be willing to put down the long stick and start vertical jigging – deep.

We’ve now gone out twice with Bernie for a couple hours in the evenings to try and land what might arguably be the biggest “trout” most folks have ever landed on a fly rod. We almost accomplished our feat last night with two fish hooked up and five other absolutely huge submarines followed our fly all the way back to the boat. In the end, we simply couldn’t close the deal, but we had excellent shots and are going to give it one more try next week before the fish decide to return to the depths.

It was some of the most intense fishing I’ve done in a long time. My heart in my throat every time a fish would follow. Russ and I chatted on the way home, racking our brains trying to come up with a freshwater fly fishing scenario where one could land a 30- to 40- inch fish that might weigh 25 pounds or more on a fly here in the lower 48. The only thing we could think of were musky and pike, which also are fickle beasts and fish of a thousand casts. What am I missing?

For more specifics on gear and tactics for giant lakers see Russ’ post over at Front Range Anglers.