The Greatest Lesson in Fishing Streamers

Most of you who follow FlyTalk might realize by now that Romano and I are both shameless streamer junkies. We’ll... 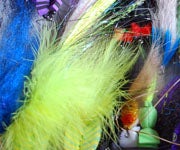 Most of you who follow FlyTalk might realize by now that Romano and I are both shameless streamer junkies. We’ll pound the banks from a boat, trying to turn big fish with blind casts, but we also like to wade and sight-fish streamers in low, clear water. Big flies catch big fish, to be sure. Yet in clear water, you have to make the right presentation for streamers to work well. While I’ve learned many valuable tips from streamer gurus like Kelly Galloup, who said, “You have to dictate the action, and not wait for something to happen,” the greatest streamer lesson I ever learned didn’t happen on a trout river, and it didn’t even involve a true streamer fly.

I was fishing on Biscayne Bay in Florida with legendary flats guide Bill Curtis about 10 years ago. Bill was on the poling platform and I was standing on the bow, when a big permit that looked like an aluminum trash can lid gliding through skinny water came cruising into view. Without a word spoken by either of us, I locked my eyes on the fish and unfurled what I thought was the perfect cast: A water-loaded beauty that formed a tight loop, rocketed 60 feet through the air, turned the leader over, and plopped just a foot or two ahead of the fish. The crab fly landed exactly on the money, or at least where I wanted it to drop.

The permit didn’t spook at first, but as I started making gentle strips, lightly bouncing the fly into the feeding zone, it abruptly finned away.

By the time the fish split, Bill was already climbing off the poling platform, grumbling unmentionables under his breath. Having thought I made the perfect cast, I was crestfallen but willing to rationalize the episode via all I had heard about the notoriously fickle nature of permit. Still, on impulse, I asked aloud, “What in the heck happened? What went wrong?”

Bill looked me straight in the eye and deadpanned, “Fish like that aren’t used to bait attacking them.”

Then he sat down behind the steering wheel, cranked up the boat motor and didn’t say another word. I let it sink in for a moment and then realized that I had been taught the greatest lesson that can ever be learned about catching wily, predatory fish with large flies; by a master in as few words as humanly possible.

Think about it and apply this reasoning to the trout world. Little, finicky trout like to sip helplessly-floating nymphs and dry flies — they demand to be “spoon fed.” But when they get big, they go after other fish. They also get smart, so when something swims toward their mouth, they don’t typically eat it.

Learn to drop streamers where trout can see them, and then immediately make those flies look like they’re panicked and fleeing. It’s a simple concept that’s easier said than done. But if you figure that deal out, I guarantee you’ll unlock the secret to catching more and bigger trout, in any conditions.