These days, a lot of the conservation-focused press for fly fishing revolves around dams; specifically, how removing certain dams has... 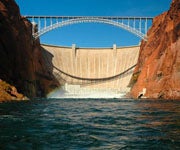 These days, a lot of the conservation-focused press for fly fishing revolves around dams; specifically, how removing certain dams has helped to restore migratory waterways for native salmon and steelhead.

No doubt, some dams have taken a major toll on fish populations, and getting rid of those dams is a good thing. But let’s call it like it is: Minus a great number of bottom-release dams throughout the country — dams that release steady cool currents year-round that trout and the bugs they eat love so much — and trout fishing as we know it in America simply wouldn’t exist. Most of those massive 10-pound trophy rainbows we like to catch and photograph wouldn’t be there for the catching. Those 30-fish days in the middle of November? Probably not going to happen.

Believe me, I love rivers like the Yellowstone and Roaring Fork for their lack of concrete. But I have also spent many a fine day catching trout in fisheries made possible by bottom-release dams, on rivers like the Bighorn and the Missouri in Montana, the Green in Utah, the Muskegon in Michigan) the West Branch of the Delaware in New York/Pennsylvania, and the South Platte in Colorado.

Sometimes, the beauty of the tailwater is that it makes trout possible in places that they don’t naturally belong, like the Guadalupe River (the southernmost trout fishery in the continental United States) in Texas, the Cumberland in Kentucky, and the San Juan in the high desert of New Mexico. My favorite tailwater in the country is the Colorado River below Glen Canyon Dam near Lees Ferry, Ariz. The number of trout there is stunning. The scenery — sheer marble cliffs towering above the river — is even more breathtaking. And it’s an amazing laboratory to test your angling skills. Trust me, you must see it and fish it to believe it.

So tell me where your favorite tailwater is, and why you feel that way. It’s okay to be a “homer” on this one. I’ll award a Rio Gold WF-5-F premium fly line, valued at $75, for the most convincing comment in the thread below. Good luck.