Popularity Contest: Do Looks Matter When it Comes to Game Fish?

Let’s face it. Trout earn high respect within the fly angling world because they are “pretty fish.” Doesn’t matter if... 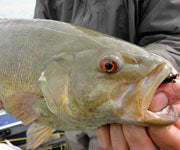 Let’s face it. Trout earn high respect within the fly angling world because they are “pretty fish.” Doesn’t matter if it’s a rainbow, brown or cutthroat. The trout is the species that other fish in the same lake or river would want to take to the prom.

A bright, ruby-sided hen steelhead would be the prom queen in places like Oregon or Michigan. But a carp? Wallflower. Trash fish. Why? Because that fish is downright ugly.

It doesn’t matter where you catch a carp (and I’m one of those shouting loudest from the bandwagon) — they may be cagey, tough and all that — there’s no denying that this fish is plain hideous. Not in a “nice personality, but” kind of way. I’m talking stinky, foul and ugly to the eyes.

Fair is fair, however, so we might as well lump others in that group. Tarpon — the majestic, prehistoric creatures that they are (and worthy fighters to boot) — when you really think about it, is also a very ugly fish. Smallmouth bass? Ugly. A worthy fish, without question, and in my opinion, probably the most underrated quarry for fly anglers in North America. But ugly nonetheless. Largemouth bass can actually be pretty at face value, but they’re so stupid, they’re still ugly. Northern pike and walleyes are so sinister looking that it’s hard to call them beauties. And bonefish? Well, let’s call a spade and say that while they shine like diamonds in the sun when they’re tailing on the flats, bring one to hand and you’ll see that vacuum cleaner mouth is woefully misplaced. Bonefish are ugly, too.

The ultimate beauty queens? Well, I’m going to go with the arctic grayling, first and foremost. The fin wins. Most species of shark are so efficiently built that one cannot help but respect the inherent beauty there. Striped bass… gorgeous in a muscle-envy way. And most salmon — the “brights” that run first like the Atlantics, kings, silvers, sockeyes, whatever — are amazingly beautiful fish, though many of those species pay the penalty of becoming hideously ugly within days after entering freshwater rivers.

My question, and I think it’s fair, is does the “ugly factor” matter? Do some fish get a break, earn coveted status, or maybe even unfair esteem and protection simply based on looks? And are others neglected for being on the short side of the same equation? After all, there is no “Razorback Sucker Unlimited” organization in America today. Does the beauty factor influence what you appreciate, and more importantly, how you fish? Or is a tug a tug?