Here’s Your Chance: Tell the EPA and Obama to Save Bristol Bay

As you know, we’ve been keenly in tune with the issue of the proposed Pebble Mine in the Bristol Bay,... 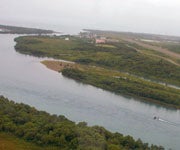 As you know, we’ve been keenly in tune with the issue of the proposed Pebble Mine in the Bristol Bay, Alaska watershed, home to the world’s most prolific wild salmon fishery. Pebble would be an open pit mine of epic proportions that would theoretically store tons of toxic crud behind a 700-foot-high earthen dam, right in the middle of the Bristol Bay headwaters.

The Environmental Protection Agency released a watershed assessment on May 18, which noted the value of the fishery, both in terms of its natural attributes and positive economic impact: 14,000 jobs/$600 million annually. The assessment also factors in the probability of a pollution failure at Pebble. While it doesn’t flat-out say that this is one of the worst places on the planet to put a mine like this, it’s pretty clear that Bristol Bay should be protected from a project like Pebble.

In other words, the EPA stated the obvious. Which is encouraging, but it’s not a done deal. Not by a long shot.

Now we need to convince the Obama Administration and the EPA to actually exercise its authority under the Clean Water Act to deep-six the Pebble project. Yesterday, hundreds of people turned out in Seattle for an EPA public hearing on Pebble and Bristol Bay; the huge majority voiced opposition to Pebble. These hearings will continue throughout the summer and into the fall. If you can go to one, do so, please. But even if you live far away from Bristol Bay, you can urge EPA to do the right thing.

Go to www.savebristolbay.org/takeaction right now, and spend a few minutes to go on record in favor of wild trout and salmon.

The natives in Bristol Bay don’t want the mine. A majority of hunters and anglers don’t want the mine. Politicians from both sides vocally oppose the mine. And the EPA has outlined how the mine could be a really bad idea. Everything should be pointing in the right direction. But we’re talking about the government here. In an election year.

Your voice matters, and if you are into the outdoors, you need to make it heard.