Releasing a Mako Shark is More Impressive Than Killing One

Following up on the catch-and-release thread from the other day, I will admit to being ashamed when I read about... 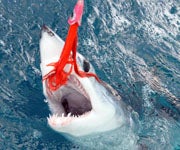 Following up on the catch-and-release thread from the other day, I will admit to being ashamed when I read about anglers killing fish for the sake of testosterone rather than for food. What triggered the thought is this story of two anglers who killed an 800-pound shortfin mako (a prime female breeder) in California.

I know, rules are rules. But I wish the media would stop with the shark-killing hero worship.

We even ran a story here a couple years ago about mako shark bowfishing. If it’s within the regulations, I guess that’s fine. But as a bowhunter and someone who has fly fished a lot for mako sharks with my friends Conway Bowman and Dave Trimble in San Diego, I can tell you that using a compound bow to shoot an arrow into a mako that’s been chummed to the boat would be about as difficult as hitting the boat cooler if you dropped it overboard.

I can’t imagine that pulling on a mortally wounded (harpooned) shark is nearly as tough as fighting one that’s only hooked in the mouth. And if you ask me what the ultimate test of fishing nerve is, I’d say it’s looking straight into the toothy maw of a live mako and using a metal tool to pull the fly out. Releasing a shark alive takes more guts than posing with a dead one.

It’s just not as easy to make a story about that, but it can happen.