I ran into Rick Dickson of Freehand Fly Fishing at the industry trade show last year. At that time, his... 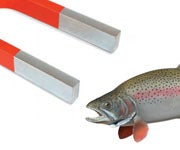 I ran into Rick Dickson of Freehand Fly Fishing at the industry trade show last year. At that time, his company was hedging their bets that magnets could up your odds of catching fish. The then anecdotal evidence convinced them to introduce a line of products that have direct contact of magnets to hooks and flies.

Well, it seems now that they’ve been proven correct. A piece in The Seattle Times — adapted from ScienceNOW.com — describes how “scientists have isolated magnetic cells in rainbow trout.” While the piece has a few typos and the author actually seems to confuse a rainbow trout with a steelhead, the science behind it is pretty intriguing.

From this story on The Seattle Times:
“_We think this will really be a game changer,” says Michael Winklhofer, an earth scientist at Ludwig Maximilians University Munich in Germany who led the new study. “To study magnetic sensory cells, you have to be able to get hold of them first, and that’s what we’ve finally developed a way to do.”

… To isolate magnetic cells from their non-magnetic neighbors, Winklhofer and his collaborators placed a suspension of rainbow trout (Oncorhynchus mykiss) cells under a microscope that had a magnet rotating around the stage that the sample sat on. Any cells containing magnetic particles should slowly rotate along with the magnet, they thought. They tested the method in tissue isolated from the fish’s noses, which contain magnetite. In each trout’s olfactory tissue, they found between one and four cells that rotated in turn with the rotating magnetic field. The team transferred the rotating cells to individual glass slides to study them further under the microscope.

In each isolated cell, the magnetite particles were next to the cell membranes, the scientists report online Monday in the Proceedings of the National Academy of Sciences. And surprisingly, the magnetism in each cell was tens to hundreds of times stronger than researchers had hypothesized, says Winklhofer. This suggests that the fish may be able to detect not only the direction of North based on magnetism, but small differences in magnetic field strength that can give them more detailed information about their precise latitude and longitude._

Interesting stuff for sure. While I’m not 100 percent sure this would help increase your chances of catching fish, many people claim that using magnets does increase your odds. Here’s my question to you: If using magnetically-charged hooks and other fishing accessories can greatly up your odds of landing fish, would you use it? Or is it like hiding a tube of scent in your pocket and applying it when your fishing buddies aren’t looking?