The image above is of the Colorado River right below Gore Canyon. Where my brother and friend are walking should... 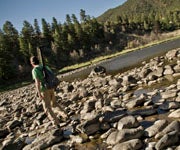 The image above is of the Colorado River right below Gore Canyon. Where my brother and friend are walking should have water covering it. A lot of it — like up to their waists. In the past 10 years, I personally have never seen this location without water running through it.

A few weeks ago, we went to this location to fish for big trout at night on mouse patterns. It was almost 9 p.m. and I took a water temperature reading. To my surprise, it was just below 70 degrees. Scary stuff if you’re a trout and in need of cool, highly oxygenated water.

After one of the driest winters that I can recall and record-setting heat here in Colorado, Trout Unlimited is asking “10,000 state members and all Colorado anglers to exercise restraint and good sportsmanship in the use of these priceless resources.” TU is asking for people to use good judgement and is, “urging anglers to avoid fishing on the Fraser and Upper Colorado rivers during the hottest part of the day, or to fish in Grand County’s higher-elevation lakes or cooler tailwater areas until conditions improve.”

“Failure to do so could set back fishing opportunities and the region’s recreation economy for years to come,” said David Nickum, executive director of Colorado TU.

While I completely agree with TU on this one and do not want to stress one of my favorite fisheries, I’m left wondering how exactly does the average angler know when it’s safe to fish and when it’s not?

Flows fluctuate regularly on the Colorado and what’s bad one day might be OK a few days later. Do you ask that people carry thermometers and constantly monitor the temps? If a fish was stressed a few days ago, does that mean it’s still in a precarious position? For the record, TU says, “Water temperatures above 70 degrees Fahrenheit can be stressful or fatal to trout.”

Water has been released from dams since TU called for action. This has elevated some of the Upper Colorado flows to a more respectable level, but they’re still far below average.

Have you all ever gone fishing for a day only to get to your spot and decide that it was not good for the fish to do so? I know it takes a lot of willpower to make that decision, and have only done it a few times myself. What do you think?