When Do You Stop Considering a Fish Species Invasive?

Trout fishing as we know it in the U.S. would simply not exist if there were no “non-native” fish or... 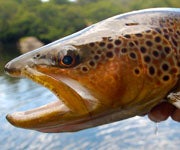 Trout fishing as we know it in the U.S. would simply not exist if there were no “non-native” fish or unnatural environments like beneath hydroelectric dams. There would be no fabled Madison or Missouri River rainbows, and no world record brown trout in Milwaukee harbor. In fact, there wouldn’t be any brown trout anywhere in America. Native to Europe, they were introduced to this country in the 1870s. Just like carp. So why do we not use the word “invasive” in the context of trout?

Let’s be honest. Rainbow trout (native only to the Pacific Northwest) are now as much part of the fabric of fishing in places in the Rockies as corn is on the plains of Nebraska (and who’s about to call corn an invasive plant?). I cannot think about fly fishing in Michigan without immediately imagining brown trout. But those trout rivers in Michigan were historically grayling rivers. And the salmon and steelhead thing in the Great Lakes is a man-made phenomenon. In fact, it all came within a whisker of being a striped bass fishery.

But there’s something special about hiking to a mountain creek and catching a native cutthroat trout in the Rockies. Or fishing a pond in the woods of Maine and catching a brook trout. The right fish in the right place is something special. But what about these same fish in the “wrong” places? Or is there such a thing at all? Is it silly that the rainbow on the Henry’s Fork of the Snake River is a prize, but it’s junk on the South Fork of the same river?

I’m a realist and a member of the “it’s all good” crowd, but I also believe in protecting and preserving native species whenever possible. After all, when I hike up to the creek and catch brook trout in the Rockies, it kind of feels like climbing a mountain and seeing someone’s initials spray painted on a rock.