Fly Fishing with SUPs is Not a Fad

A SUP, for those yet uninitiated, is a Stand Up Paddle board. I can see Mr. Joe Cermele rolling his... 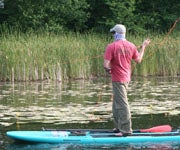 A SUP, for those yet uninitiated, is a Stand Up Paddle board.

I can see Mr. Joe Cermele rolling his eyes now…

It’s been almost a year to the day that I last posted on this subject and started fishing off my very own board. That post had quite a bit of spirited conversation and comments. Granted it did have a healthy dose of ladies in bikinis fishing off said boards…

Since then I’ve heard that SUP fishing is a fad and a “silly way to fish.” Ahem, Mr. Cermele. I’m here to tell you it’s not a fad and it’s not going away.

The sport is exploding and I’m seeing boards everywhere — from rivers to lakes, and of course, out in the ocean. I just returned from the ICAST sportfishing trade show a couple of weeks ago, where a number of companies were showing off their latest fishing SUPs; more than in any previous years. And why not? They are fairly inexpensive (compared to other water craft), give you the advantage of height (unlike a float tube or belly boat), have supreme stealth, are insanely easy to use, draft almost no water, can be used almost anywhere, and are just a ton of fun to be on.

One of the more notable manufacturers in the SUP fishing realm right now is Freedom Hawk Kayaks. I had a chance to check out their new Predator board at the show and I must say it’s one the most thought out boards in regards to fishing that I’ve seen.

“”Because of the SUP Craze, dealers have been pushing us to design a SUP which would be stable enough to fish from yet also cruise the shallows on fishless days for a combination of exercise and fun. They also wanted it to be lightweight, less than 30 pounds,” said David Hadden, president of Freedom Hawk Kayaks. “After 16 months of prototyping and testing SUP designs, we feel we have designed a fishing SUP with the right combination of stability and efficiency… This is not going to be as stable as our patented Freedom Hawk Kayaks, but for customers wanting to experience the fun and exercise capabilities of an SUP, and fish, we believe we have designed and engineered the perfect blend.”

Hadden went on to add that while there are SUPs being marketed to the fisherman, this board is the first one designed from “the skeg up specifically for kayak fishing.” The one I saw had a yeti cooler attached as a seat complete with rod racks and a paddle that doubled as a push pole.

Have any of you tried SUP fishing yet? If so, do you like it? If no, why not? Oh, and if you’re in the market for a board, do yourself a favor and do check out Freedom Hawk Kayak’s new board. It’s a work of art with every feature thought out specifically for anglers.