Resist the Urge to Re-Cast When Fish Don’t Bite

Sometimes, the angler has to resist the forces of instinct. Here’s an example: You make an errant cast, maybe miss... 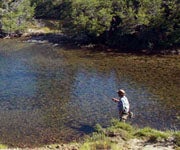 Sometimes, the angler has to resist the forces of instinct. Here’s an example: You make an errant cast, maybe miss the strike of a fish, and you soon find your leader and tippet tangled around the end of your fly rod. So what do you do? You give that rod a few spins and shakes–as if a flick of the wrist will magically untangle the knotted mess. We all do it, even though that’s one of the dumbest moves we can make. Honestly, how often does a knot get better, rather than worse, when you try to untie it by shaking the rod? Maybe once in a hundred shakes?

The same is true with re-casting at fish. You make a nice presentation. The fly floats perfectly into the run. You see a fish move on the fly, maybe splash at it, but no dice. You’ve been refused. So what do most of us instinctively do at that point? Of course… we pick up the line and fire that fly right back at the fish. And when it doesn’t eat the bug that time, we cast again, and again, and again.

Sure, we all have heard the old adage, “if at first you don’t succeed, try and try again.” But that seldom pays off on the river. At least not in the context of firing off repeat casts within seconds at the same fish.

I have seldom, if ever, seen an angler successfully beat a trout into submission. And yet, the most common presentation mistake I see–among newbies and seasoned anglers alike–is that repeat shot. Sometimes presentation has as much to do with timing as it has to do with placement, especially after a refusal.

To fight off that natural instinct to shoot again right away, try some tricks to slow things down. Recite the alphabet in your head, forward and backward a few times. Sing “God Bless America.” Go sit on the bank, take off both your boots, and put them on again. Whatever it takes to create a pause of a few minutes.

Here’s what I like to do whenever I see a fish that’s interested enough to check out my bug, but unwilling to commit: I go to the bank, sit down, and change the fly. Remember, the fish refused for a reason. I figure that my pattern is pretty good, just not good enough. So I size down. Switch a size #14 dry fly to a size #16 or #18. Wait a few minutes, and go again. Give that a try, and you’ll catch more on the second cast. I promise.