Diving with Tarpon Can Make You a Better Fly Angler

I am on a family vacation on the island of Bonaire. It’s part of the “ABC islands” (Aruba, Bonaire and... 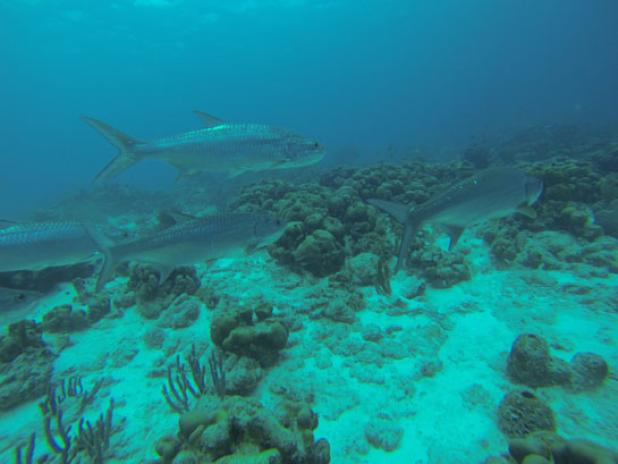 I am on a family vacation on the island of Bonaire. It’s part of the “ABC islands” (Aruba, Bonaire and Curacao) in the Caribbean, just off the coast of Venezuela. While I have been doing some bonefishing — which I will write about later on (there are some really big bonefish here, the flats are very interesting, and I caught eight fish the other day, between breakfast and lunch) — much of my time, however, has been spent under the surface of the sea. Bonaire is one of the best do-it-yourself shore diving destinations in the world. You literally just pick up your tanks and go.

Naturally, I saw turtles, rays and many other aquatic species. But my favorite fish to dive with are the ones I like to catch with a fly rod. In this case, I spent a lot of time diving with tarpon and barracudas.

I think the main reason I like diving with tarpon so much is that it gives me a totally different perspective and appreciation for them. We go from being traditional foes to buddies. When you watch how graceful and powerful they are under the water, you cannot help but value them as much more than a mere “target” when you have a fly rod in your hand above the surface.

You will also learn some valuable lessons on these “be the fish” dives, like my “Going Deep” stories on trout and bass. They add a lot to my angling experiences because I get to see first hand how and why fish behave the way they do, rather than guessing what’s happening below the surface as I stand on a boat.

I have always wanted to do a “Going Deep in the Name of Tarpon Research” story, but there are some limiting factors. First, where there are tarpon, there are things that eat tarpon. Enough said. Second, the visibility typically isn’t that good in many of the best tarpon spots. Sooner or later, I will set up a dive situation in some clear water channel or inlet in the Keys and just watch tarpon eat.

I did watch tarpon work as a pack the other day, forcing baitfish into a ball against a reef and then swiping and slashing through the fish for about 15 minutes. I also saw a barracuda charging vertically to eat a fish. It was laid up just below the surface in typical barracuda fashion, and all of the sudden it surged straight downward and ate a small fish several feet below it. I have no idea how the barracuda saw or sensed the other fish.