Shouldn’t Your Fishing License Be Free When You’re 99 Years Old? 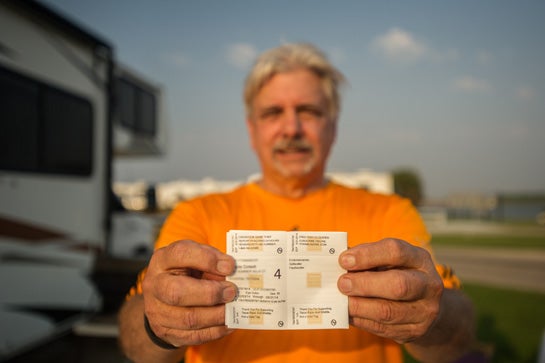 The gentlemen you see here is Greg Corbett. He’s holding a Texas fishing license that says he’s 99 years old. Yeah, Corbett has some gray hair, but he’s nowhere near 99 years old. It’s tough to see, but trust me the DOB on the thing reads 12/05/14 (that’s 1914).

I was fishing with Corbett and his compatriots last week on a photo shoot for Field & Stream when Greg broke out his license and shared the story of how it came to be. Turns out the clerk who entered the data used his driver’s license expiration date instead of his birthdate and it was never fixed. He has actually been stopped with this license on the water before with nary a glance from a Fish & Game officer. The officer simply stated that “he could only hope to be fishing a paddling a kayak at his age” then left him to keep fishing. Granted, Corbett was wearing a hat, glasses, buff, long sleeve shirt, sun gloves, etc, but come on, officer…

We all got a good chuckle out of this, and the question about paying for a fishing license at 99 came about. Should you have to pay for a license if you’re that old and still out there fishing? A number of other “license” stories made their way around the group after this one – including mine. Last year while bird hunting in Montana I accidentally entered that I was a female. I did correct it, but when I went back to get a fishing license this spring I came up as a 35-year-old, 5-foot-10-inch, 175-pound lady. Wonder how long that one’s going to last…?

What about you all, got any strange fishing license stories?