No matter where you live, if you fish rivers in the springtime it can be a maddening dance — especially... 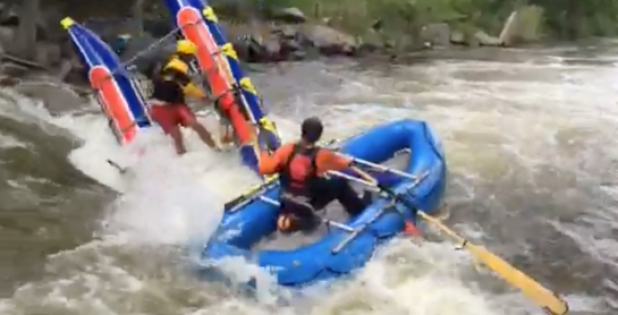 No matter where you live, if you fish rivers in the springtime it can be a maddening dance — especially in the West. The river gets good, water temps rise, fishing can be hot … then boom! It can all be over in the matter of a day or two when the high elevation snow starts to melt. Right now where I live, the rivers are are in full runoff mode. It’s a dirty, super high, chocolate mess. Almost everything is blown out.

Of course there are the tail-waters and if you have a good guide or friend who knows their local river, you can always catch fish no matter the flows. It’s just a matter of putting in the time and changing up techniques. My friend and super-guide on the upper Colorado River, Jack Bombadier, is one of those guys who knows his stuff and the water intimately. He lives on one of my favorite rivers to float and fish and is in tune with his stretch of the Upper Colorado.

In most “normal” years, the Colorado up there gets to around 5000. Right now it’s about 8000. As Jack says, we’ve got the highest snowpack since 1994. That’s big and where the water level will stop rising nobody knows. Other regions in the West are seeing similar conditions. Northern Colorado, Wyoming, and Montana all got absolutely hammered with snow this year.

Jack, not unlike me, likes to look at the bright side of things and while fishing is possible he says, “It’s time to get the whitewater gear out.” Jack also says, “We’re likely looking at a month of this before it starts to come down. The section of the Upper Colorado River that I live and guide on is usually a pretty mellow section to float, with only a couple of rapids and bridges to navigate. Once the level gets over 5000 cfs though, it’s a different story. The sheer volume of the water creates numerous fun waves and wave trains. When river levels rise so does the speed of the water, which is why a river’s height doesn’t double when its cfs does. CFS is a measure of a river’s volume, and not height. Because its moving faster there is more total water volume traveling past any given point on the river without being twice as high. Its one reason that I like to look at cfs numbers instead of the gauge height figures most USGS gauges also display. The gauge height number will vary from one part of the river to another, depending on how wide the river channel is and the gradient.”

Jack aslo goes on to say that, “Another advantage to those high water conditions is that the fish tend to congregate in eddies, out of the main body of the river. So even though the water is deeper, they are easier to find, more competitive and less wary. This makes the fishing pretty fun, because instead of just methodically working the banks all the way down the river, you can concentrate on the eddies. In between the eddies, the water runs fast and furious, and you can just enjoy riding the big waves and forget the fish for a moment. It’s like a half-fishing, half-whitewater trip.”

I tend to agree with Jack and really enjoy whitewater and have started to get the boat out. My local creek in town is small and we can almost never run a full oar rig down it. A few years ago we started doing it and typically have only a week give or take to do it with water levels. It’s a fun game, but can bit a little dicey. The raft you see on the right is me. I’m a fairly competent boater and have run my fair share of rivers and whitewater, but I’m a angler at heart and have learned to row like one. The boater on river-left in the cataraft is my friend Keith Pearen and is a certified bad ass in a boat and a solid class 4-5 boater. Here, he’s surfing on purpose. Me, I’m just struggling to get out of that sticky hole.

Runoff gives me the chance to practice stuff like this, chase warm water species, and learn lakes I never would have looked at before. What about you? Do you ties flies? Boat?