After much deliberation, I finally picked a winner to last week’s caption contest. There were a ton of hilarious responses... 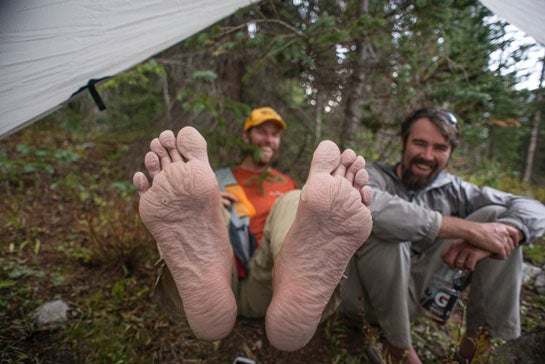 After much deliberation, I finally picked a winner to last week’s caption contest. There were a ton of hilarious responses that I liked, but the one that had me laughing the most came from Craigb, who not only wrote a funny caption but utilized both feet and fishing references.

Craigb, shoot me an e-mail at tim@anglingtrade.com and I’ll get your copy of “SALT: Coastal and Flats Fishing” sent right out.

Here are some of the others that had me rolling, but didn’t quite get it done:

from Cbass123: “Are those his feet, or is he smuggling mushrooms?”

from paul h: “Looks like a bad case of Plantar Fishyitis!”

from SwampDonkey012: “I tell you what Tom, i’m grateful that I finally got my foot transplant but I never expected to get them from an 80 year old donor.”

from Castnblast: “The smile soon faded from the other guys face when he realized they have to share a tent.”

from Seth Parker: “After a long day of making fake bigfoot prints through the forest, Tim was beginning to regret bragging about his exceptionally large feet to the Animal Planet producers..”

from Dusty Hughes: “You want krinkle cut or regular fries with that???”

from Sureshot516: “Billy has found the fountain of youth, however the pool is slightly smaller than his 6’4″ frame.”

from Sven_Katur: “The last time I saw feet like that one of them was sporting a a toe tag…”

from wittsec: “I got my mom’s eyes and my grandpa’s feet.”

from drawer.bli: “Everyone come around and look closely. Can you find a flat spot where we can pitch our tents? Yeah, I can’t find one either.”