Okay, so some of you have asked me about the gear I am using as I fish the Dean River... 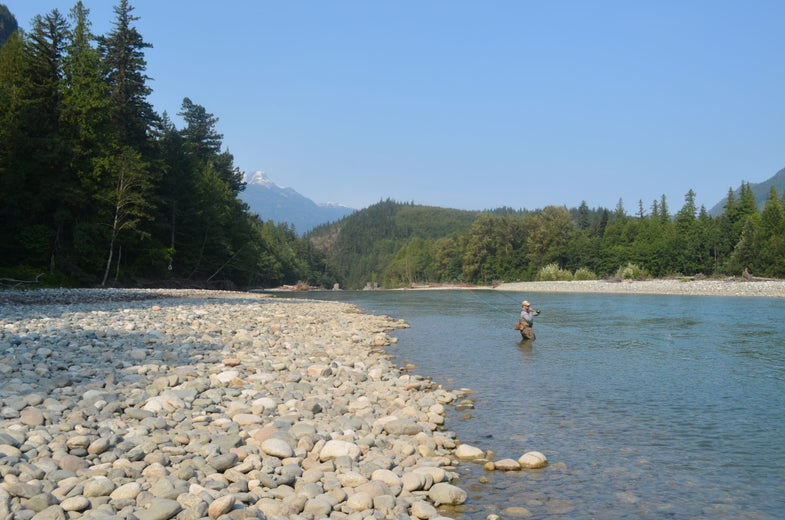 Okay, so some of you have asked me about the gear I am using as I fish the Dean River in British Columbia for wild steelhead. It’s a fair question that deserves some straight answers.

Truth is, when you go this far afield, and you are on a “trip of a lifetime,” you don’t have any wiggle room when it comes to the gear you choose. Going to the Dean, you have a 50-pound weight limit to fly in with. You’re going to catch some of the hottest, toughest fish in the world. And if something fails, you’re SOL. There’s no backup plan. Believe me, I get asked to ‘try this and test that’ all the time, and I am normally happy to do so. But when I go fishing for myself in a place that really matters, I don’t jack around. I work with the stuff that I trust.

So here’s my gear roster for the Dean:

I wore Eddie Bauer clothes the whole time, from underwear, to socks, to the Harbor Rain Shell.

I brought three rods. All two-hander 8-weights. One I had fished for the past 10 years, from Iceland to Argentina. One backup. And I brought the new Sage Accel 8136 two-handed Spey rod. I fished the Accel 90 percent of the time, because I cast it better than the others. This isn’t a super-high-end rod; it’s G5 graphite with low frills in terms of accents and components, but I immediately fell in love with it. This rod is actually a departure from the quest to go “faster and lighter.” Instead, it’s all about “let’s figure out a workable taper given the materials we already have.” It costs less than premium rods, but I think the action is probably better than most. This is a sleeper rod.

I used a Nautilus No. 12 reel, which I have had for many years. And I wouldn’t trade for the world. You over-size on the Spey rivers, and it’s all about the drag.

I wore Patagonia Rio Gallegos zippered waders. Super reliability up top, but the foot comfort in the boots cannot be beat. If you’re going to a far-away place and you don’t want tow worry about leaks (or comfort issues) these Patagonia waders are the best in the world.

I chose Korkers Devil’s Canyon wading boots with interchangeable soles, hiking on plain rubber and wading the river with aluminum bar soles, as I said I would.

Lines… now this is a very important consideration indeed. I fished a RIO Skagit Max 575-grain head, with a self-improved running line consisting of Skagit flight (RIO) and 40-pound straight monofilament running line, then down to plain 20-pound Dacron backing. If you’re new to Spey casting, you’re dumb to embrace anything other than a straight Skagit style, and this RIO system is all you need to get you to boom out casts. Remember, you don’t always need to go long… you need to go straight and honest, and drop the fly in the bucket. This line adds distance, but the real benefit is accuracy.

I used RIO MOW tips, and mostly concentrated on T-11 varieties, swinging between 5 feet of floating line with a 5-foot tip, to all floating when I skated bombers, to dredging with 10 feet of T-14 when the water was up. Tips and sink rate matter 100 times more than fly selection on most wild steelhead rivers. Hit em in the face, and they’re going to eat it…

Flies, of course, differed by day, and all that depended on water clarity and depth. On high runoff days, it was darker flies, and in clearer water, we would skate dries, or swing traditional patters like a “Thunder & Lightning” classic wet fly. But most of my fish were caught on a black “Fish Taco” available from Umpqua Feather Merchants.

There you have it. Head-to-toe. Rods, reels, and all that noise. If you get a chance to fish the Dean with this stuff, great. But even if you’re just plying your own home waters for brookies, or carp, or whatever, while you might not have to go two-handed to get there, all these gear recommendations are rock-solid. I just bet a trip of a lifetime on all this, and I couldn’t be more satisfied.