The more I walk and wade on aluminum bar soles, the more I think they are the best overall option... 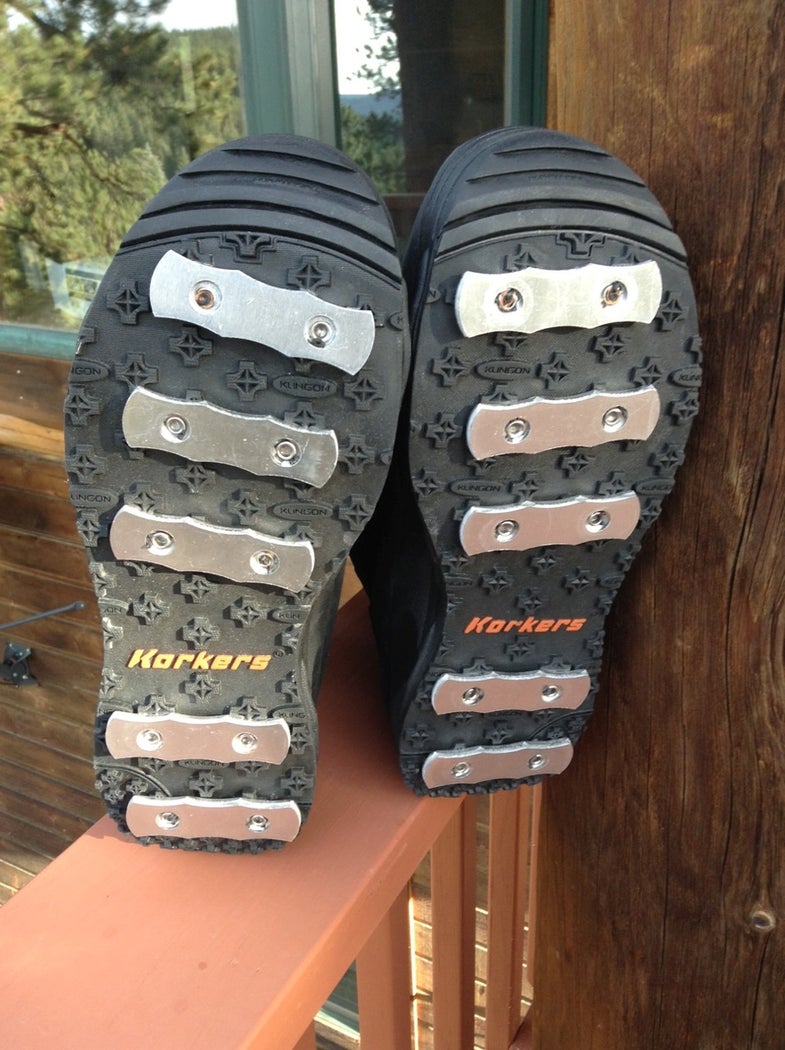 The more I walk and wade on aluminum bar soles, the more I think they are the best overall option for wading stability and safety. We all know the drawbacks associated with felt. Felt grips great, and has been the standard for years, but it is blamed for the transport of invasive species that damage rivers and ruin fishing, particularly trout fishing. (Of course, transport of invasive species is only really mitigated when anglers take the time to clean their boots, felt soles or otherwise.) I’ve tried a number of rubber soles, which are generally cleaner and easier to hike on, but not quite there in terms of performance in slippery rivers. Studs are fine, and they bring rubber soles almost even with felt, but you don’t want to be wearing studs in boats, especially the kind that could pop.

As odd as they look, simple aluminum bars on the bottom of boots offer surprisingly great traction. They cut through slime, and grab on to rocks. Period. It’s actually a concept that’s been around for a while, especially in the climbing world. Patagonia really brought aluminum soles back to the forefront a couple of years ago when the company introduced River Crampons and wading boots with aluminum bars on their soles. The aluminum solution is really the only thing I have found that I feel comfortable in recommending to a friend who is still glued to felt. It’s the only thing that I think works as well, or better even, than felt.

There are, of course, a few drawbacks with aluminum. First, over time, the aluminum wears down. For awhile, as the metal spreads out, that’s actually a good thing, offering more surface coverage, but eventually it loses its effect. Second, I don’t like long hikes on aluminum bars, not only because that wears them out, but also because it is uncomfortable. Third, aluminum really isn’t a whole lot better than studs when you’re clanking around in a boat or a float plane, though it is more raft-friendly than pointed spikes are.

So the best solution is to hike, boat, and so forth with regular soles, and then add the aluminum when you jump in the river to fish. The Patagonia Crampons are one good option for that scenario.

Korkers has another good option in its Alumatrax interchangeable soles. They cost about $60, work with Korkers boots (prices vary), and can be swapped out for regular plain rubber treads in about 10 seconds. They’re light, easy to store in a backpack, and seem to grip as well as anything out there.

As I plan my trip to the Dean–a river noted for its treacherous wading conditions–I’ve decided to go with the Korkers.

Does anyone else have any thoughts, good or bad, on aluminum wading traction?