Petzal: Live from the SHOT Show

I had expected to find a fog of fear hanging over this SHOT Show like the miasma lingering over a...

I had expected to find a fog of fear hanging over this SHOT Show like the miasma lingering over a used Pamper lying beside a dumpster, but such is not the case. New products do not leap at you from every booth, but there’s plenty of people here, and enough new stuff to keep life interesting, so here we go.

Leupold’s new line of VX-3 riflescopes is the third generation of the Vari-X III, which dates back to the 1970s. The new line is full of improvement that have migrated downward from Leupold’s pricy VX-7 scopes. Mainly it’s little stuff that adds up to make the scopes stronger–better screws, better springs, second-generation waterproofing, and an extended-twilight lens system. Altogether, the VX-3 is a considerably more advanced scope than its immediate predecessor, the VX-III.

Here’s an odd one. Brazos Walking Sticks is a Texas company that makes canes, walking sticks (what else?) and shooting sticks, and it is the last that are of interest. Not only are they useful to walk with and shoot with, but they are freakin’ gorgeous. Brazos uses all sorts of exotic woods and other natural materials, and these sticks are almost prettier than Ms. Elisha Cuthbert. Prices, considering, are very reasonable. Brazossticks.com

E.R.Shaw, Inc., the barrelmaker, has been around forever, and now they’ve extended their line to include custom rifles built on Savage bolt actions. Prices vary along with the limitless list of options, but a typical gun with a spiral-fluted stainless barrel and a laminated stock is around $900. What you get for the money is a lot–and I do mean a lot–of hand work, in something that will probably shoot like a house afire. The new rifle is called the Mark VII, and it’s not simply an overhauled Savage. I will be getting one to shoot and will let you know how it does. Ershawbarrels.com 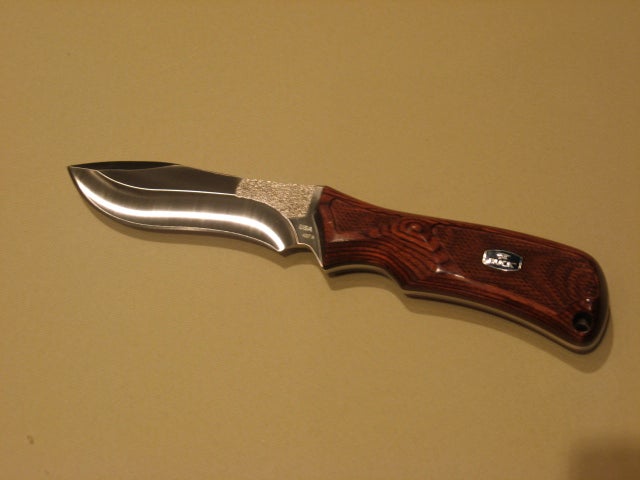 How anyone can come up with a new knife at this late date is beyond me, but Buck Knives has. It’s called the Avid Model 497; a big-game skinner with a blade of 12C27 MOD Sandvik Steel (no, this is not your daddy’s Buck), a nice, big, excellently shaped rosewood Dymondwood handle, and a very good sheath. Although it’s got a skinning-knife belly, you can use it for just about anything, and that big handle is a winner. MSRP is $130. Buckknives.com

Have to go now. There are booth babes I have not seen.

Editor’s Note: We’re tracking down photos for these, so check back soon.