I had previously written about seeing the gorgeous 28 gauge Model 37 at SHOT Show, made entirely in Upper Sandusky,... 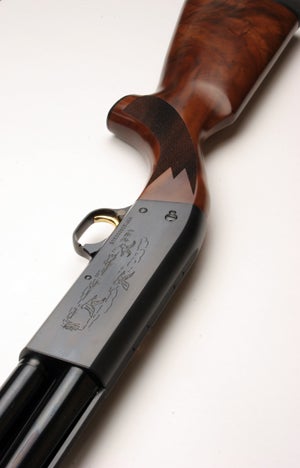 I had previously written about seeing the gorgeous 28 gauge Model 37 at SHOT Show, made entirely in Upper Sandusky, Ohio, USA, by the latest incarnation of Ithaca Gun. Last week I got to shoot one of the 12 gauge Featherlight Model 37s, and it is a dandy. Just like Ithacas of old, it’s light and slick to pump. If anything, it may be better made than the classic 37s. The machining, fit and finish are all first-rate, and the new guns have solderless ribs. The rib posts are milled as part of the barrel, and the rib is attached with a screw. It’s an elegant piece of gun making.

Therein lies both the coolness of these new 37s and the problem: it’s a beautifully made, fit and finished . . . pump. Ithacas have a strong cult following, but there are roughly 2 million 37s already out there, many of them a steal on the used gun market. The new guns list for $859 for a vent-rib model, $759 for a plain barrel and the question is, how many people like Model 37s enough to pay that much for a pump gun?

I would suggest they go another way. Outside of the Tar-Hunt there is no finer slug gun than the Ithaca Deerslayer. I have the DS III, which has a 26-inch, heavy, fluted, rifled barrel fixed to the receiver. The one time I took it to a 200 yard range, I put every slug I shot into groups I could cover with the fingers of my outstretched hand. For a slug gun, that is outstanding performance.

However, the DS III is richly blued, has a buck engraved on the receiver, and is stocked with nicely checkered walnut. It sells for $1,189. The DS II is the same gun, but with a lighter-contoured barrel, also rifled and fixed and carries a price tag of $899.

I have told three different ownerships of Ithaca that their slug gun is better than anyone else’s, and if they could lower the price a hundred dollars or more by putting on a synthetic stock and an unpolished blue finish, they could sell a bunch of these guns. Am I right or am I missing the point here?