Petzal: How I Almost Made My Fortune

I spent this past week in an elevated stand in Maine, looking for deer that are no longer there, and...

I spent this past week in an elevated stand in Maine, looking for deer that are no longer there, and in the process, hit upon a way to make the money all of you think I have. I was part of a group of 12 or so geezers who get together the third week in November every year and dodder around with rifles. Some of us have been attending these soirees for almost 20 years, and it is a pleasure to be around people who know the lyrics to “How Much is that Doggie in the Window?” 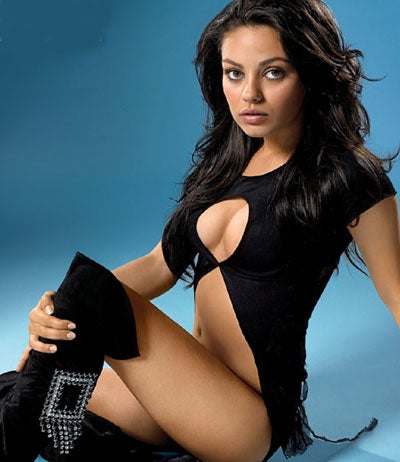 So there I was, sitting in the stand, getting in touch with my Inner Fudd, trying hard not to think of Ms. Mila Kunis (shown), when it came to me: A deer-camp franchise catering only to people over 63 (the median age of our camp) who could show proof of physical disability (sciatica, rotator cuff, deafness, miscellaneous gimps). I would call them Cardiac Camps. There would be a doctor and nurse on staff at all times; no one would have to walk more than 8 feet; appearances before Death Boards would entitle you to your choice of stands, and so on.

But just as I was putting together a business plan, a redtail hawk, attracted by my orange Fudd hat, swooped down from the ridge above and tried to get in the stand with me. At the last instant, however, the crazy bastard saw that he would not fit through the window, and flared off.

I lost my train of thought, so nothing came of the idea, but I think we could waive the age requirement for Ms. Mila Kunis. Happy Thanksgiving.