Last year, because I had been especially good, I gave myself a Benelli Montefeltro for Christmas. This year, my German... 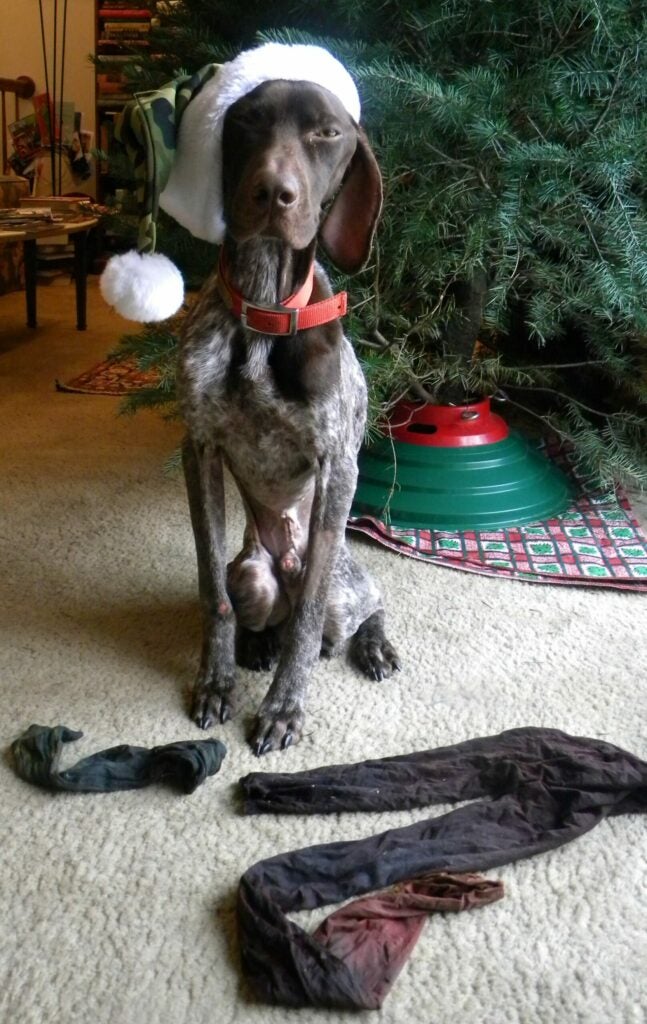 Last year, because I had been especially good, I gave myself a Benelli Montefeltro for Christmas. This year, my German shorthair Jed launched a pre-emptive strike on my Christmas budget, giving me a pair of my wife’s tights and a sock. Ordinarily, tights and a sock wouldn’t empty the Christmas nest egg. However, once the tights and sock have been eaten by a dog, then you have to pay to have them surgically removed from his stomach, the price goes way up.

So far, Jed has been a great little dog – affectionate, obedient, with excellent hunting instincts – but he has one huge flaw: he seeks out and eats Pam’s socks and gloves every chance he gets. Usually, they pass right through him, but when he found and bolted this unguarded pair of tights along with a random sock, they stuck in his stomach and lower intestine.

I hoped they would pass but they didn’t. Jed lost weight and grew weak. Doing nothing would have killed him. Last Sunday I took him in to our local veterinary emergency room (Bright Eyes and Bushy Tails in Iowa City. They are wonderful). We couldn’t see the tights on the X-rays, but while the vet was looking him over, he tried to throw them up. One leg came out. I would have grabbed it and yanked it like a lawnmower cord, but the vet said that would have damaged his intestines. Instead, she cut off as much as possible, then said cheerfully, “Well, now we know where they are. It shouldn’t be hard to get the rest.”

Jed went through surgery fine, and I went to pick him up after he spent a day recuperating. The veterinary assistant told me what a good patient he had been, that he was not chewing at the line of staples in his stomach, and that the staff all loved him. She went to get Jed and came back without him a minute later. “Uh, he just ate the pad in the bottom of his cage,” she said. “We’re going to give him a mild sedative and induce vomiting.”

Jed successfully threw up the cushion and they brought him out to me.

“Why didn’t you put a zipper in his stomach for me instead of staples?” I asked.

Jed is home now and starting to regain some of the weight he lost. There’s even a slight chance we’ll be able to go hunting before the season ends January 10. Having almost lost him, that would be the best Christmas present I could ask for this year.

Merry Christmas to all of you, and remember that your health and well-being, and that of your family – and even of your pets – matters far more than whatever material gifts you might receive.