The dog in the photo is Jaeger, a German shorthaired pointer found wandering near Clarinda, Iowa. At some point in... 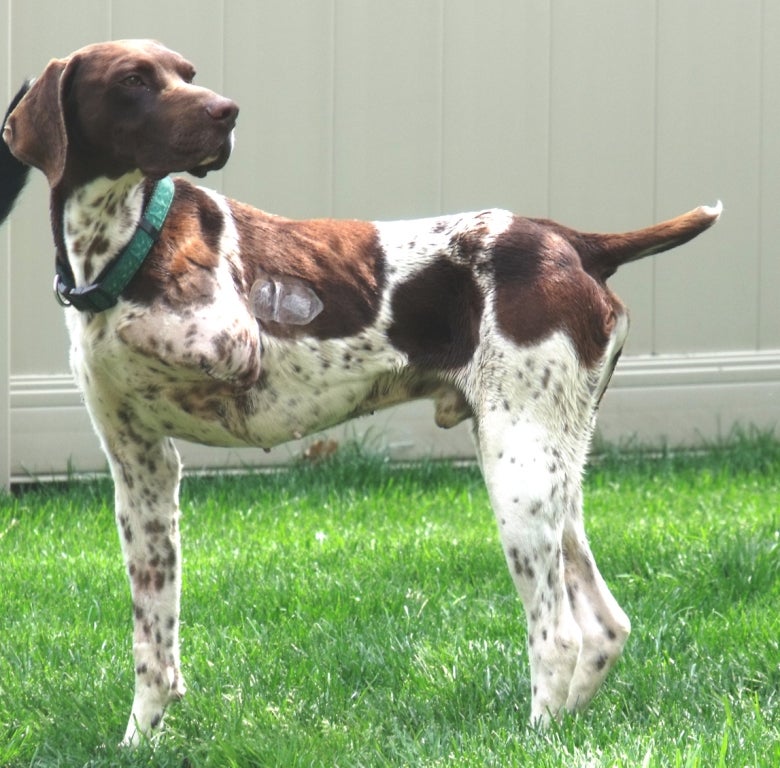 The dog in the photo is Jaeger, a German shorthaired pointer found wandering near Clarinda, Iowa. At some point in his travels his front leg was shattered by a .22 LR bullet. Jaeger is poster child for a sad trend: the number of abandoned dogs goes up in direct proportion to the number of people who have lost homes and jobs. While I can understand that – sort of – what I think is a crime is this: after two record low pheasant harvests in Iowa you have people giving up pheasant hunting and dumping dogs like Jaeger all over the state. Since this is GSP country, a lot of the abandoned dogs are shorthairs.

I knew none of this until a friend of my mother’s called me the other day. She had found a two-year-old male German shorthair a week before. She called local vets and the sheriff. She put up signs and took out classified ads. No one claimed the dog. My mother’s friend is in her 80s and doesn’t need a high energy bird dog. Trying to help her place it I talked to two shorthair breeders who agreed: “You wouldn’t believe how many people are abandoning shorthairs right now.” One of those friends put me in touch with Great Plains Pointer Rescue, a non-profit group in Omaha that rescues GSPs in Iowa and Nebraska. Janelle Ford of Great Plains said since last fall she has seen a huge increase in abandoned shorthairs. “We read on Craigslist where people have lost homes and need to place dogs,” she said. “We’ve helped some people with dog food so they can afford to keep their dogs.”

Unfortunately, many people simply drive their dogs to the country and kick them out of the car. That’s what probably what happened to Jaeger and the dog my mother’s friend found. Great Plains Pointer Rescue’s dedicated volunteers take in lost GSPs and give them foster care in their homes, then place them with new owners. Ford says she evaluates dogs with bird wings and loud noises to see if they’re hunting dogs, and if they are, she places them with hunting families.

Ford reports that Jaeger is recovering extremely well after the amputation of his injured leg. Courtney Cerkin, a GPPR volunteer from Des Moines, is on her way to see my mother’s friend and her dog on Saturday. My thanks to them and everyone else who gives their time to abandoned bird dogs.

I just wish there was a way to keep the people who dumped dogs because there were no pheasants from getting new ones when bird numbers go back up.