Some time ago I introduced you to the Work Sharp Knife and Tool Sharpener, a small belt sharpener that has... 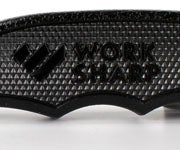 Some time ago I introduced you to the Work Sharp Knife and Tool Sharpener, a small belt sharpener that has had roughly the same impact on Western civilization as the printing press, penicillin, and the Hula Hoop, and all because it is the first device that will let even the most fumble-fingered put a razor edge on nearly anything that cuts. (I have put a paper-slicing edge on a Cold Steel Spetsnaz shovel with it.)

The one disadvantage to the machine is, you can’t take it into the woods with you, and even if you could, there would be no place to plug it in. Enter the Work Sharp Retractable Honing Rod, which is eminently portable (5 inches long, maybe 2 ounces) and requires no power whatsoever. Its plastic handle houses a 4-inch ceramic rod that pops out for use, and will restore a working edge to your knife with blinding speed.

It is, as near as I can see, foolproof. The front end of the handle incorporates two sloped guides that will give you a 25-degree cutting edge. You place the blade flat on the guide and sweep it across the rod. Work Sharp says the rod is fine grit; I think it’s closer to medium. I couldn’t get the finely honed edge that enables you to shave hair, but I could get a very sharp, fairly coarse edge that will cut damned near anything else with about 3 strokes on either side of a dull blade.

This is the best way to keep slicing and dicing with a genuinely sharp knife. It works, period, and it costs $19.96.