Korean War M1 Rifles Might be Sold as Souvenirs

According to this story, a large number of Korean War surplus M1s may be on their way to the U.S.... 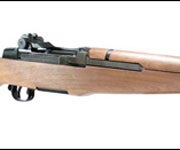 According to this story, a large number of Korean War surplus M1s may be on their way to the U.S. to be sold to Korean War veterans and their families as souvenirs this summer — in time for the 62nd anniversary of the Korean War.

This immediately reminded me of my late father-in-law who fought in Korea. He spent eight years in the Marine Corps and to hear him tell it, he spent most of his hours in those eight years cleaning his rifle. He used to say that when he was in the Marines, he dreamed of the day he got out so he could buy an M1, leave it in the backyard, pee on it every day and watch it rust. I don’t think he was serious. He was very fond of the M1 (the M14, not so much) and proud of Marine Corps marksmanship in general.

At any rate, if this deal goes through, the rifles will be for sale this summer.