Best Bang for Your Buck: Beretta 3901

People ask me what kind of gun they should buy. I tell them: “If you want a really good gun... 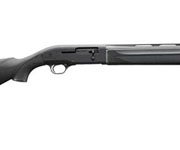 People ask me what kind of gun they should buy. I tell them: “If you want a really good gun for not very much money, buy a Beretta 3901.” I picked one up late last summer and my sons and I have shot targets and hunted with it and I already want another one.

The 3901 is a budget version of Beretta’s A390, which was Beretta’s top of the line semiauto throughout the 1990s. It is now two generations old, having been replaced first by the A391, then the wondrous A400. It may not be cutting edge anymore, but the 390 was beloved by target shooters and high volume dove lodge operators as a semiauto that always worked. That hasn’t changed.

The 3901 is made at Beretta’s factory in Accokeek, Maryland, although the barrels are made in Turkey by Steoger. It is not an attractive gun. It is a bare bones semiatuo that comes in 3-inch 12 gauge only, with a black synthetic stock and forend with a hard plastic buttplate. The metal is matte finished. It weighs 7 pounds, 10 ounces with a 28-inch barrel threaded for Beretta’s Mobilchokes.

As an all-around gun the 3901 is hard to beat. It is at the upper end of what I will tolerate in a pheasant gun weight-wise, but it’s not terrible. For doves, waterfowl and summertime clays, it’s just right. Mine has shot a lot of my slow 7/8 ounce reloads, plus 1 ounce Winchester steel 7s for doves, 1 ¼ ounce Winchester Supremes for ducks and some high velocity lead pheasant loads. The instructions recommend a break-in period with heavy loads if the gun has trouble cycling at first, but I just took mine out of the box and started shooting reloads through it, and it has yet to malfunction. It’s easier to clean that a 391, although not as easy as an A400, but it will go a long time between cleanings if you want it do. It comes with one stock shim which allows you to tinker with fit a little bit, and others are available.

The safety is at the front of the trigger guard, a placement some people don’t like, but I have found it easy enough to get used to. The safety itself is very easy to find and operate, even with gloves on, and it’s easy to reverse for left-handed use, too.

The stock is drilled for a swivel stud, and someday I will get around to putting swivels on mine and adding a soft rubber pad, but we have been shooting it as is with no problems at all. The 3901 lists for $645 and you will commonly find them for $600. If you don’t think that’s a deal, you haven’t priced semiautos lately.