Shotgun Tip: Staying In The Zone

Talk to good shotgun shooters, and they will tell you they get “in the Zone” where targets look as big... 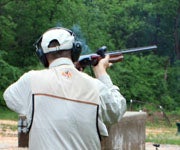 Talk to good shotgun shooters, and they will tell you they get “in the Zone” where targets look as big as trashcan lids and birds seem to fly in slow motion. I get in the Zone sometimes, but the difference between ordinary pretty good shots like me and really good shooters is that the champions can find the Zone regularly and stay in it. For me, being in the Zone is a fragile state.

I had cause to reflect on this these last few days as we filmed Gun Nuts, Season III. Having two camera men depending on me to hit targets helps me focus. It’s just the right amount of pressure and it often puts me in the Zone. In the picture here (actually taken last season) I am breaking a trap target with a camera on my gun. I broke 103×105 trap targets that day, about half with a camera on my gun blocking my view of the target. I was In the Zone.

This season, when the Wolf Creek Production guys cranked the cameras us I got right back into the Zone. I missed exactly one target before lunch the first day and we set up some stuff like a “grouse in the woods” shot that were pretty difficult. I crushed them all.

However, when I fall out of the Zone while we’re filming, I melt down completely. It happens two or three times each Gun Nuts season. That same afternoon we filmed a segment about sporting clays guns that required me to shoot a very easy double on a pair of looping targets. I broke enough of them for the segment – thankfully – but then I missed the closer, easier target, and that was it. My Zone evaporated. The target was 15 yards away and hanging in front of me. I missed it again and again. I would have had a better chance of hitting it if I threw shells at it. Shotgun shooting is a funny thing which is why I find it so interesting.

I am also grateful for the magic of editing. We will not be doing a “Gun Nuts Live” show if I have anything to say about it.