The late Finn Aagaard, who was a PH for many years, claimed that elephants were the greatest of all African... 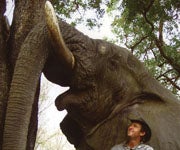 The late Finn Aagaard, who was a PH for many years, claimed that elephants were the greatest of all African dangerous game, and among people who have hunted the Big Five, I doubt you’ll find much disagreement. “The Essence of Elephant Hunting” is a DVD put together by Charlton-McCallum Safaris, and after watching it I doubt you’ll disagree either.

The photography is professional (except for when the cameraman is running for his life along with everyone else) but the disc is devoid of the shuck and jive that you see in the hunting programs produced for television. As one example, mopane flies swarm in front of the camera lens, and everywhere else. The little bastards are a fact of life in Africa, and no attempt is made to hide it.

What you get to see is elephant hunting as it really is, and also, in the course of events, some very good shooting, largely with double rifles. Buzz Charlton’s clients are experienced with elephants, and very proficient with their guns. Getting off two fast aimed shots with a .500 while something that weighs 6 tons is bearing down on you at 5 yards takes a certain degree of skill, and possibly a change of underwear.

“Essence” is more expensive that a conventional DVD, but on the other hand you’re not going to see anything remotely like it anywhere else. For information on ordering, go to the website.