Should Young Hunters Start With Deer and Turkeys?

Here’s me, on the set of the Gun Nuts TV show, holding my pick for the ideal youth turkey gun:... 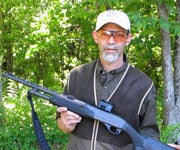 Here’s me, on the set of the Gun Nuts TV show, holding my pick for the ideal youth turkey gun: a 20 gauge 870 Express Jr. with a red dot sight.

It is short, light, doesn’t kick much with the right loads, and it’s easy to hit with. My younger son shot his one and only turkey with it, and I have since taken it from him and killed turkeys with it, too. While you don’t have to put a $500 Zeiss Z-point on a kid’s gun, I think some form of red dot sight (and a lot of target practice before the season) is the best way to be sure a kid doesn’t miss.

Which brings me to my real point: for a lot of kids now, deer and turkeys are the first game they hunt. I am not sure that’s a good idea. Even though sitting in a blind and plinking a turkey someone else calls in for you is easy, killing a turkey is still treated as a big deal. Kill a turkey – or a deer – and a lot of people shake your hand and treat it like it’s a big deal. If you don’t get one, or you miss, well, you failed. It’s not good for kids to attach that kind of pressure to a first hunting experience. It should be about enjoying the outdoors, learning to hunt, and, ideally, bringing home some game. A friend of mine took a kid years ago who missed two turkeys in the same morning. He never went turkey hunting again after that.

I started my sons and a few other kids on youth season ducks. We always had enough chances that everybody who started with me killed at least one duck.

Really, squirrels are the very best animals for kids to start on. They are lots of them, so if you miss one, you don’t have to wait long to find another. Usually you can find at least one stupid squirrel that will sit still on a branch and let a kid shoo t it. People don’t generally tend to ask “get your squirrel yet?” as they do with deer and turkeys so a kid who is unsuccessful doesn’t feel as if he or she failed, which is the last thing we want in a first hunting experience.