I have been skeptical of the current trend to high velocity lead shotshells. Unlike steel, which benefits from high velocity,... 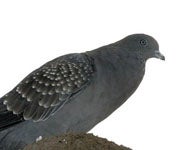 I have been skeptical of the current trend to high velocity lead shotshells. Unlike steel, which benefits from high velocity, lead is dense and retains energy well. Therefore I have always thought lead doesn’t need to be driven at high speeds to be effective. I have shot a lot of pheasants with lead loads ranging from 1,220 fps to 1,500 fps and noticed no apparent difference in how the birds react nor in how many I bring to bag.

However, recalling my trip to Uruguay made me reconsider.

As I mentioned, we pass shot pigeons in grainfields. While South American doves, ducks and perdiz may be 20 gauge birds, spot-winged pigeons most definitely are not. To give one example of how tough they are: I hit one solidly twice, it flew 100 yards to where my friend Greg was standing and he shot it twice. By then the pigeon was weighted down with enough pelllets it could only fly around Greg in a dazed circle. He reloaded his O/U and killed it with a headshot.

That first day we were shooting lead flyer loads of 1 ¼ ounces of lead 6 shot at 1220 fps at pigeons but I had also brought some boxes of Kent Tungsten-Matrix 1 ¼ ounce loads of 5 shot (almost, but not quite as dense as lead) at 1,400 fps left over from the morning duck hunt. As soon as I switched ammo I could tell the difference immediately. Instead of shrugging off hits or requiring follow-ups, most pigeons folded and fell dead when the fast 5s hit them.

Obviously the change in shot size and material means there were more variables than velocity at work. Whether it was the added energy of the bigger pellets and high velocity combined, or whether that velocity allowed me to make better, front-end hits on the birds I don’t know. It may have been some of each.

However, I noticed the difference velocity can make, once again, the other day in a more apples-to-apples comparison. A friend bought some Winchester Super Sport 1 1/8 ounce, 1300 fps loads to shoot at 16 yard trap. There is a dramatic difference in how hard the clays break when you hit them with high velocity pellets. It stands to reason high velocity pellets hit birds harder, too.

Whether that speed is necessary is another question. After all, you get an “X” on your scorecard whether the target breaks into two pieces or two hundred, and faster loads exact a price in added recoil.

So, while I still lean toward lead loads of of low to middling velocity, I am open to the notion that faster can be better if any of you would like to try convincing me.